‘Greenpoint: The Transition’ Is Your Little Slice of Polish Culture

Sure, you may have been a regular at Lomzynianka before they closed inexplicably “for renovations” a few months ago. And, sure, you’re always at Cafe Riviera in the mornings for a coffee and a pączek. But, did you know that there’s a way to dive deeper into Polish culture right here in Greenpoint?

For the past year a half, Greenpoint: The Transition has been bringing a little slice of Polish culture to our neighborhood by way of workshops, food tastings, musical performances, fun activities, and street fairs. Recently, we caught up with Marta Pawlaczek, who helms The Transition, to talk about the ‘hood, the food, and, of course, the changes.

Pawlaczek arrived in Brooklyn a little over two years ago with a passion for non-profit work and the desire to make a difference. She grew up in Poland as Poland itself was undergoing tremendous changes, majored in journalism at the University of Wrocław (which she followed up with masters’ degrees in cultural studies and philosophy), and then plunged into community projects ranging from creating philosophy workshops for senior citizens to organizing modern dance programs for teens.

Eventually, Pawlaczek became the vice president and grant and project coordinator for the Warsaw-based Culture Shock Foundation, which is the umbrella organization for Greenpoint: The Transition. But then, “I wanted to develop my skills here,” Pawlaczek says of her move the United States. “I found the library; I met people in the neighborhood; and we came up with this project based on what people were saying that they would like to see happen here in Greenpoint.” She adds, “My first steps in New York were here.”

From the outset, The Transition was created with Poles in mind, plus anyone with Polish roots or an interest in Polish culture and history—and thus included programs in both Polish and English. “A lot of people were talking about the changes in the neighborhood, that Greenpoint is changing and that a lot of Polish people are moving out because of the high cost of living,” says Pawlaczek. “My observations were that there weren’t enough free cultural and educational programs offered for Polish people, especially for those who don’t speak English.

There’s a group of people who have lived here for a long time, but they still don’t speak the language well,” she explains. “I wanted to give them cultural programs here that they would have access to in Poland and to focus more on the good that can come from change—not just that it forces Polish people to move out but maybe to find the area that is ‘neutral.’ In my opinion, culture is this area. We can promote Polish culture in Greenpoint and introduce new residents here to it.”

The first year definitely had its highs: “I think that the festival was a pretty big success, even though we didn’t have a lot of funding to organize it,” Pawlaczek says, decidedly. “The fact that it happened, that people came and had a good time, and saw that something like that is possible,” she says, made the it an event that brought together the whole community. In total, around 2,000 people came to enjoy the Polish food, music, and activities that day.

Still, at the end of last year, The Transition did a self-evaluation. “We had to see what had a good turn out and what didn’t work,” says Pawlaczek, “and we tried to create this year’s program based on those experiences and other ideas that people gave us throughout the year.”

“What I heard from people who participated in the whole program was that it was something new for them and something that never happened before in the community, especially the more interactive forums like workshops,” says Pawlaczek. “The fact that the workshops were free was something that people appreciated.”

But, that’s not to say that there weren’t challenges. “I was not really known in the community with the first edition of the program because I had just moved here,” says Pawlaczek. “It was definitely like no one knew the organization and no one knew me so it was hard to make connections and to spread the word to people.”

Even with those hurdles, in 2014, anywhere from 20 to 30 people showed up for the first twelve lectures; 30 to 40 came to the six part concert series each time; and around 10 came to each of the smaller workshops that were held at the Greenpoint Library. This year, however, “word has spread more,” she says, and it’s much easier to get people involved.

Among the new programs that were implemented this year, there’s an on-going ‘oral history program’ organized in conjunction with the Emigration Museum in Gdynia in northern Poland. “We want to find the interesting stories of Polish immigrants and conduct interviews,” says Pawlaczek. “We are really excited about this because we heard so many stories last year about people coming here and what their experiences were, but there is no physical record of it.” Now, she says, people in Poland will be able to hear firsthand descriptions of “what it meant to be an immigrant at that time” in the United States. Currently, interviews are being conducted with those who arrived in Greenpoint before 1989.

In addition, this fall, there will also be a series of lectures “led by a Polish lawyer who will be explaining to people who want to come back to Poland—but who left before the change of the [government] system—how society has changed and how culture and politics have changed, and will give them practical advice about what they need to know about retirement and other laws,” say Pawlaczek. 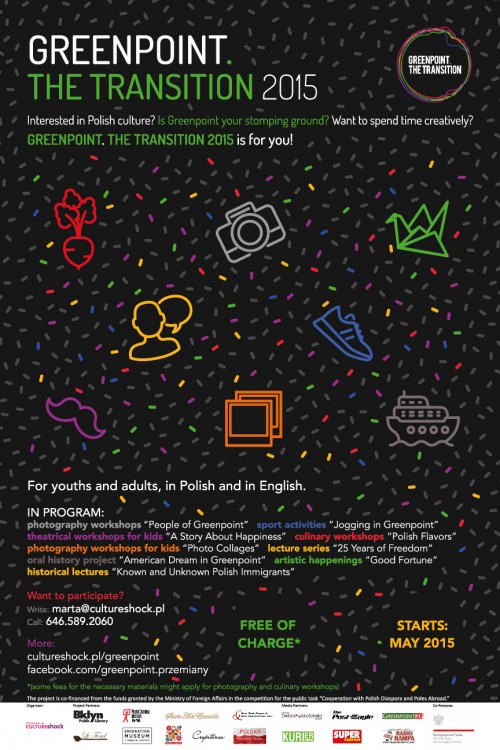 If you have questions or would like to participate in any of the workshops or lectures, please e-mail marta (at) cultureshock.pl.