There’s been a whole lot of comings and goings amongst Greenpoint’s bars and restaurants recently.  Here’s a round-up of a few changes that are on our radar…

Brooklyn Barge Bar  (3 Milton Street) – This novelty floating bar has been a long time in the making and it’s looking like they’ll miss the boat with the summer crowd if they don’t get things going soon. Time Out are throwing a ‘first look’ party  ($25 for unlimited beer and oysters) on the barge on August 26th, so it’s quite likely that this will be their opening night. Let’s hope they don’t have to cancel like they did with their 4th July celebrations. But, if they do, at least it means that Transmitter Park will stay a haven of tranquillity for a little longer.

Brooklyn Label (180 Franklin Street) – A sign in the window of this popular brunch spot says ‘closed for renovation’, along with a request to renew their sidewalk liquor license. However, it’s just been confirmed by the owners that the business is actually being sold and will be re-opening as something different in due course.  END_OF_DOCUMENT_TOKEN_TO_BE_REPLACED

‘Greenpoint: The Transition’ Is Your Little Slice of Polish Culture

Sure, you may have been a regular at Lomzynianka before they closed inexplicably “for renovations” a few months ago. And, sure, you’re always at Cafe Riviera in the mornings for a coffee and a pączek. But, did you know that there’s a way to dive deeper into Polish culture right here in Greenpoint?

For the past year a half, Greenpoint: The Transition has been bringing a little slice of Polish culture to our neighborhood by way of workshops, food tastings, musical performances, fun activities, and street fairs. Recently, we caught up with Marta Pawlaczek, who helms The Transition, to talk about the ‘hood, the food, and, of course, the changes. END_OF_DOCUMENT_TOKEN_TO_BE_REPLACED

On the Friday night after Christmas, Half Gallery director Erin Goldberger could be found at an artists’ studio in Greenpoint, where a few friends—photographers, musicians, writers—gathered in the kitchen over wine and an assortment of Moe’s Doughs donuts. A Francoise Hardy song was playing off a cell phone connected to a record player with an amplifier, and Erin’s laugh floated above the music. She was re-telling family stories she had just learned over the holidays about her Sicilian great-grandparents, who immigrated to New York at the turn of the last century (her paternal grandparents arrived in New Jersey from Poland after the Second World War).

The stories were funny, although this isn’t the first time that I had seen Erin captivate a small audience. She can recall names, memories, and obscure details at the drop of a hat, and delivers her sentences like an expert pool player: delicately on one shot, sharply on the other, and packed with dry wit on the next. A few minutes later, we went outside to sit on the front stoop and I turned on my recorder… END_OF_DOCUMENT_TOKEN_TO_BE_REPLACED 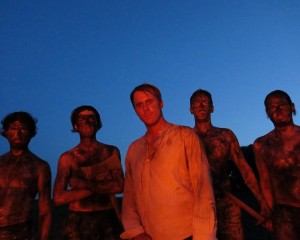 Greenpointers, along with Pancakes & Whiskey and Buzzchips, is putting on a show at Cameo Gallery this Saturday 1/18. There are four great bands on the bill: Adios Ghost, Youngman Grand, Folding Legs, and Canon Logic. All week long, we’re featuring one of the bands to get you even more excited to come party with us this weekend.  The series closes today, and our final installment features Canon Logic. END_OF_DOCUMENT_TOKEN_TO_BE_REPLACED