I worry that most people that catch them as part of a large outdoor music festival lineup are going to dismiss them as just another jam band, and not follow them in a regular way. That is why this weekend’s picks focus on bands and DJ’s that are performing in North Brooklyn locations where they can best shine.

The Chromeo and Hot Chip shows are both sold out, but if you come a little closer, I’ll let you in on a secret. Craigslist has been lighting up with face-value tickets to individual shows like these that are part of the Governor’s Ball After Hours series. Other well-known acts are performing locally as part of the series too, as listed in this poster. After-market tickets, many also at face value, can also be purchased for some events through the official Governor’s ticket site.

Of course, if you are going to Governor’s Ball this weekend, you are going to be able to catch A-Trak, The Decemberists, The Black Keys, AND Hot Chip in the same location at the same time. (Jealous sigh). Well, we can all enjoy the Northside Music Festival, running from June 11th through the 14th: tickets to individual shows can be purchased here, and there are a number of free shows too. Check out Greenpointer’s festival details post here. 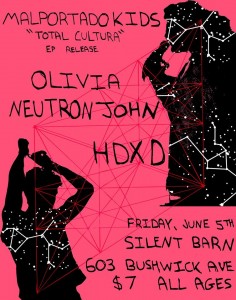 Another fine match between a band and venue will happen at Silent Barn (603 Bushwick Ave.) when the Malportado Kids hit the stage. They describe themselves as an “anti-colonial tropical dance punk duo from Providence, RI.” They play Friday, June 5th as the last of three acts starting at 8 pm.

Silent Barn’s spartan, grungy room should provide the perfect setting for this band’s raw, ranting, yet infectiously rhythmic tunes, and the Bushwick crowd is unlikely to bristle at its left-wing activist commentary.