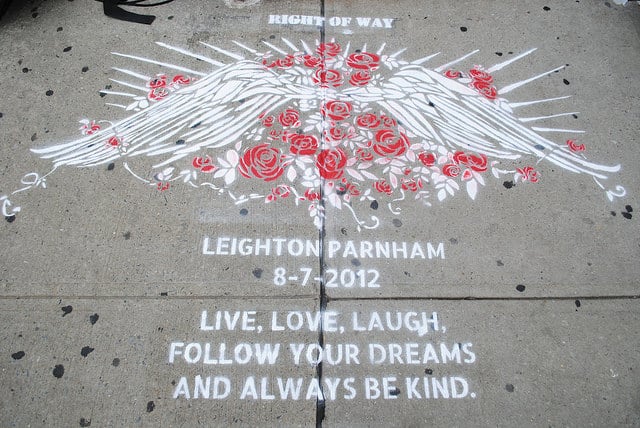 On October 18th,  Right of Way–an organization that promotes the right of way for pedestrians and cyclists, teamed up with a group called Families for Safe Streets to show folks traffic fatalities aren’t just a faceless statistic. Eight different locations were chosen to show where victims were killed and were honored with street art memorials. Seven of the sites involved families, the eighth location was chosen in remembrance of an “unknown victim”.

Organizer of Right of Way, Keegan Stephan said, “The families of the first seven requested that this unknown loss be memorialized alongside their very personal losses as a gesture to all victims of traffic violence: known, unidentified, and the unknown who will suffer until Vision Zero is achieved.”

(Vision Zero is a new plan which aims to reduce the city speed limit from 30 mph to 25 mph. Provided no yahoo tries to block it, the law will be enacted on November 7th, 2014, according to the city website.)

Everyone involved in Right of Way’s memorials cycled to each location in the Bronx, Manhattan, and Brooklyn where they adorned the street with spray-painted flowers, alongside the victim’s name and date when they died.

Two of the seven memorials took place in our own backyard of East Williamsburg: 19 year-old Leighton Parnham, was killed on the corner of the Metropolitan Avenue and Humbolt Street in East Williamsburg by a hit-and-run driver in August, 2012, and Mathieu Lefevre, a 30 year old artist, who died on October 18th, 2011 after being run over by a flatbed truck which entered into his lane.

Many families flew in from all parts of the country to be part of the event.  As you can see from the pictures, it was an emotional day.

In addition to paying respects, both Right of Way and Families of Safe Streets are on a mission to curb unnecessary deaths. They want the state to impose stricter penalties for traffic accidents. At ground level, they are pressing the NYPD for stronger enforcement of traffic laws such as the failure to yield law, and conduct more investigation into suspicious crashes.

As it stands right now, plenty of traffic fatalities go unheard of because police aren’t required to inform the press about such incidents. Take it one step further and you’ll find instances of police failing to even blame the driver for the cause of death until months after the fact, as was in Mr. Lefevre’s case.

Thankfully, come this November 7th Vision Zero will mark a turning point in the legislation. While not a cure-all, slower speed limits are definitely a step in the right direction.

As for the memorials, the mother of Mr. Lefevre said it best when she spoke with New York Magazine, “[memorials] give dignity to the family. It says we’re not going to accept this preventable carnage in the streets — we value and honor human life. And it speaks as a cautionary measure. It says ‘This street is a dangerous place. Be cautious. Be careful.’ The purpose here is to save lives. It’s saying ‘We care.’”

Don’t think I could’ve said it better myself.