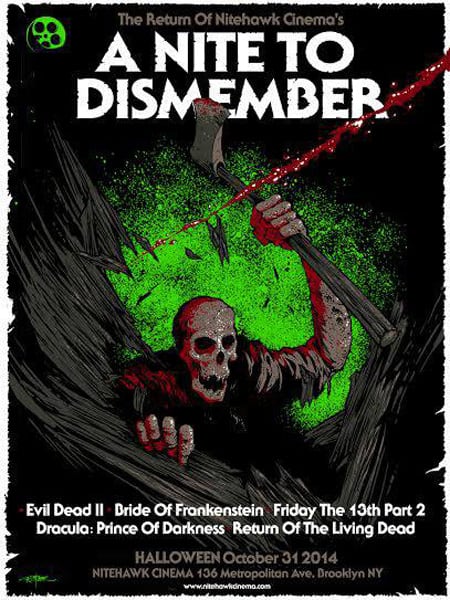 Nitehawk Cinema’s October 2014 slate is unsurprisingly full of the spooky and scary. But that’s not all they’ve got going on this month. Here’s a look at what will be playing in October.

The current films playing at Nitehawk are The Skeleton Twins, The Zero Theorem, Bjork: Biophilia Live, and The Two Faces of January. Later this month, Whiplash, Listen Up Philip, and Birdman will open.

If you are looking for some kid-friendly scares, there are a few spooky screenings for the whole family, too. They’re creepy, they’re kooky, and they’ll be gracing the brunch screens on 10/4 & 10/5…that’s right, I’m talking about The Addams Family. The following week (10/11 & 10/12), Monster House plays.

One last Halloween event that merits special attention is Nitehawk’s second annual “A Nite to Dismember.” Starting at midnight on Halloween, five films, all horror sequels, will be screened. It’s quite a slate: Evil Dead II, The Bride of Frankenstein, Friday the 13th: Part 2, Dracula: Prince of Darkness, and Return of the Living Dead. According to the website, “There will also be horror shorts, inspired montages, giveaways, trivia, and a costume contest plus breakfast in the morning. Hosted by Fangoria’s Sam Zimmerman and Nitehawk’s Kris King!”

Lastly, here are the special event screenings for the month:

That’s all of it for October – as of press time, at least. My two picks from what I’ve seen are Pulp Fiction (one of my all-time favorite films) and Halloween. My three picks of what I’d like to see are Birdman, The Assassination of Jesse James, and The King of Comedy (I’m kind of a sucker for screenings with Q&A’s or speakers, as well as Michael Keaton, though all these films have enough reason to see them on their own). If you are a horror fan, you really ought to check out a few of these films, it’s quite a range. There are ticket links throughout the post. Happy viewing!