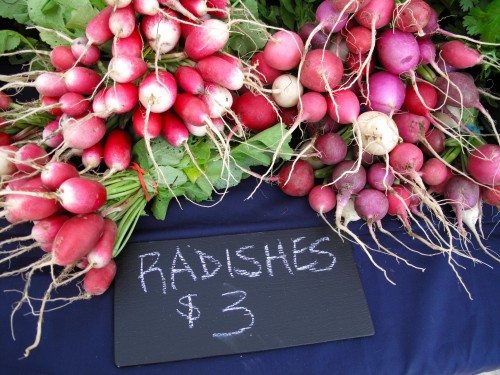 The 2014 market season marks the debut of Full Circle Farm, both as a farming endeavor and as a vendor with Down to Earth Markets, the crew behind the McGolrick Park and Cooper Park farmers markets. Shelle Bailey and Jesse Mandel run Full Circle Farm in Dutchess County, NY, and this summer is the first time the couple has ever sold their produce at a farmers market.

Devotees of thoughtfully cultivated food can find Full Circle Farm every Sunday at Cooper Park’s Down to Earth Farmers Market. It takes place at the park, on Maspeth Avenue at Olive Street, from 11 am to 4 pm every week through Sunday, November 23rd. We recently sat down with Shelle as she shared about the adventures that led to Full Circle Farm.

How did you come up with the name?

My boyfriend, Jesse, and I did a lot of traveling around to different farms from Maine to Texas and everywhere in between. We did work stays. We ended leaving New York, going to Tennessee, to New Orleans, to Texas, to Tennessee, to Maine, back to Tennessee, and then back to Texas (laughs). So we ended up doing circles across the country. We also liked the name because it symbolizes nature, its balance, and how everything replenishes itself.

How long were you gone?

A little over two years; we came back in October of last year. As you can imagine, the traveling had ups and downs to it. We had everything we owned in our truck and that was it. Several times we pared down even more than that. It’s funny – we bought a topper for the truck and we call that “our first house.” And it really was.
We slept in the back of the truck as we traveled from place to place. Sometimes we stayed for a little while, sometimes we stayed for longer – it depended on what was going on. We had a lot of fun.

What was the inspiration for touring all these farms?

Well, I met a real farmer. He [Jesse] is a fifth generation farmer and I’ve been growing my own food for home use for a long time. Also, I was selling at markets with my own artwork and jewelry business. I was also selling vegetables from a friend’s farm at various markets and found that I really enjoy farmers markets. So,
combine the two, and there you go. I met someone who was into it as much as I was. It was just the right time in both of our lives to say, “Let’s GO” – and we did. It was great, cheap way to travel, and you can learn something from anybody. We decided to hop around without a big plan. We took opportunities as they arose. Then we finally came back to his family farm that had been a small mom and pop dairy farm for a long time, before his father retired. Now he’s back on the farm. Together we’re starting up with vegetables, eggs, and honey. His dad kept bees when Jesse was growing up, and now he’s back at it. We’re planning to grow from produce to full diet and currently we’re adding chicken and beef.

What kinds of chicken and cows are you keeping?

French Label Rouge chickens. They are different from the commercial breeds that grow tremendous in size. And we have grass-fed Scottish Highland beef. We focus on natural, grass-fed animals. “There’s nothing better than Dr. Green,” as Jesse says. Everything we do is either heirloom variety or heritage breed, varieties that are known for quality and flavor. We grow the things that taste good and even the bugs love them.

How do you fight those guys?

It’s difficult. Right now flea beetles are coming out. We’re using Diatomaceous Earth to combat them. I won’t spray anything that’s not organic.

Where do you get your vegetable seeds?

There are so many great seed companies. Hudson Valley Seed Library is doing a lot of great stuff with heirloom varieties. Fedco has great selection, too. Eventually we’ll be seed savers. But there’s so much to do this year getting started. We’re fixing fences, building facilities for the animals, and trying to turn new ground.

You said that you haven’t always been a farmer – how did you get into it?

Well, my family – especially my both of my grandmothers – always grew their own food. So I learned from them. They also taught me how to preserve food. A few generations ago, my family was full of full-time farmers, and I think it stayed in the blood. I grew up in the Adirondacks, in Essex County. It’s cold up there, so I’m loving this warmer growing season.

How many acres is Full Circle Farm?

The whole farm together is 175 acres and we use about half of that for animal pasture. Then we’ve got about two acres cultivated for vegetables. We have plenty of room to expand, but we can’t get too big for our britches yet.

Emily is a long-time Greenpoint resident and advocate who believes strongly in local economy and the power of community. At Greenpointers, she hopes to connect you to your neighbors and help our community retain it's personality and distinct Greenpoint spirit through highlighting local stories, businesses and opportunities.
View all posts by Emily G →