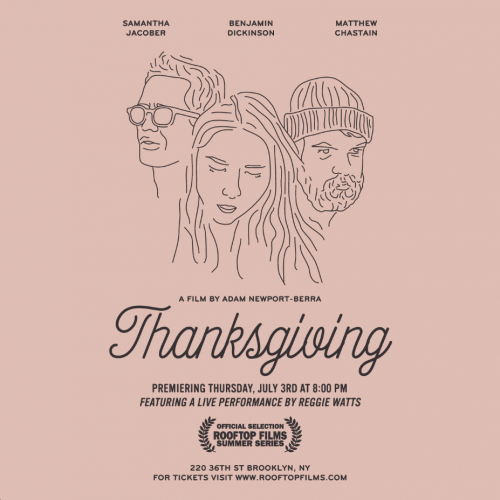 It’s been a little while since I’ve had a chance to post, but I’m coming back to you with some music & film events taking place over the next few days. And as a bonus, I have a live performance video shot on location in North Brooklyn.

I have had the chance to check out one of Rooftop Films summer 2014 events this season (Obvious Child. It was awesome, go see it!). Tonight is one that deserves special attention. It is in Industry City, but I have a feeling it’ll be worth the trek to go see the world premiere of Thanksgiving. Directed by Adam Newport-Berra, it is the story of Amy and Alex, a young urban couple in love. Their dynamic gets disrupted when Amy’s brother Will makes a surprise appearance. You can view a trailer here.

Prior to the feature, the short Manicure will play. Its brief synopsis also mentions an unexpected visit, on the morning of the protagonist’s mother’s funeral. And prior to the films, guests will get to hear music by the singular talent that is Reggie Watts. Perhaps better known for his comedy, Reggie has nevertheless developed a unique and magnetic presence as a performing musician. I’ve never seen him live, but based on some videos, I know it’s not to be missed.

This event kicks off at 8:00 at Industry City, 220 36th St. in Sunset Park. It costs $13, and tickets are available online or at the door. Oh, and director Adam plus various cast members will be present for a Q&A after the film and there’s an after party after that.

On Tuesday, July 8th, Nitehawk has another spectacular entry in their excellent Music Driven series. They will be screening Bad Brains Live 1979 & 1982, a combination of My Picture in the Movies, Baby and Live at CBGB. Bad Brains one of those seminal US hardcore acts. I always tell myself I need to spend more time checking them out, this could be a great chance. Even better, Darryl Jennifer of the band will do a Q&A after the film. The event starts at 9:30 and costs $15. Tickets can be purchased here.

As I mentioned, I’ve been unable to post as much as I like to normally, so I have a backlog of songs, videos, and more that I want to share. Today, I have some new(ish) videos from All Axis. We did an interview with founder Chris Piazza a few months ago. In it, there was a ticket giveaway to see The Men, which All Axis was filming. Perhaps our contest winner can be glimpsed in the clip of “Pearl Gates” below. If that’s not enough for you, All Axis also unveiled Young Widows rocking “Kerosene Girl” at GP’s fine venue St. Vitus.