Greenpointers are going places this summer—all of the gallery places, and we’re taking you with us. Who are the people behind the lively GP art scene? How do they like their coffee? Where do they hang out? We’ve got the scoop right here. This week, we walked through the maze that is the old Greenpoint Terminal Building at 67 West Street to Scott Chasse’s gallery and wood shop space on the 2nd floor, called Calico.

It’s a sunny Saturday morning and Scott is already at work building a custom piece for an artist who lives in Chelsea. His wood shop is neat and organized. Scott comes across that way as well—he takes a moment to think about my questions before he answers them. His answers are open and direct, but measured. Here is someone, I think, who builds precise things for precise people.

Scott has spent the past 4 years becoming a Greenpoint local after moving here from Boston with his then girlfriend, now wife. In Boston, he was the director of The Distillery for ten years, an artists’ building and community in South Boston. He was also an artist in his own right, with numerous exhibitions across the state of Massachusetts in Arlington, Cambridge, Somerville and, of course, Boston. In New York, he continued to draw (OMGWEBCATS) and paint, and showed his work in exhibitions around Brooklyn and Manhattan.

In September 2012, he founded Calico, version 1. “I had come across an ad for a small studio sublet space. 100 square feet. It was cheap,” he says. It was also located on the 2nd floor of the current Terminal Building space, just down the hall from the new Calico, version 2. “This building that we’re in right now was just derelict for the most part,” Scott explains, “which was very desirable to me. It looked like it was a corner that was untouched. It looked like the perfect spot.” Since Calico 1 opened, the gallery has kept expanding and taking on new elements. In addition to the wood shop, “now in the new space, there’s other artists that have studios in the space as well, which makes it that much more interesting,” says Scott.

GP: Where does the name Calico come from for the gallery?

Scott: A Calico cat is like a patchwork cat, with different colors. I mean it’s unique to that look of a cat, and I thought that the space is sort of patchwork as well. I operate on sort of a patchwork, jumping from thing to thing—it’s not just a strict, commercial, art selling room. The space is flexible and the shows vary, and I’ll be bouncing back and forth between my gallery and wood shop and my normal workdays. People come here for different reasons, which is nice. Yeah, it’s the patchwork element or that sort of mixed coloring of the calico cat.

GP: What brought you to Brooklyn?

Scott: I grew up north of Boston, and I lived in Boston for 10 years before moving to New York in 2010, so I’m new. I actually lived in South Boston where you have all of that rich history. It’s a neighborhood in conflict, just like Greenpoint. There’s new things happening and resilient, old things that are staying put. My now wife, then girlfriend, she’s a scientist and she got a position down here at Sloan-Kettering, a post-doctorate position, so I sort of just took what I was doing in Boston and have been piecemeal rebuilding it here in New York, like one thing at a time. Now I have the shop, now I have the gallery, and I’m sort of back to where I was.

GP: Why’d you pick Greenpoint of all the places in this great city?

Scott: Well, when we moved to New York I knew nothing about New York—

GP: —Except that you hated the Yankees.

Scott: I’m not a sports person, so no comment.

Scott: You know, I think it was sort of by chance. And I was actually living on Roosevelt Island, of all places, when we got here. And when you leave Roosevelt Island and go through Long Island City and start to come into Brooklyn, you pass through Greenpoint and you’d continue to wherever. And we would come through, and I was like, “What is this neighborhood?” And I wasn’t really sure. I was still trying to figure out just Brooklyn in general. So I think it was just the ad for that studio space that really got me over here. I had come across an ad for small studio sublet space. 100 square feet. It was cheap. This building that we’re in right now was just derelict for the most part, which was very desirable to me. It looked like it was a corner that was untouched. It looked like the perfect spot. And I was like, “Oh, I’ll take that.”

GP: What’s your hangout spot in Greenpoint? Have you found a place?

Scott: Well, we’ve definitely been having happy hour at Broken Land (on 105 Franklin Street). I would say that happens frequently. I guess like just out of convenience, if I’m going to get a drink after work, I float around to whatever’s close by. But I would say Broken Land in particular. It’s nice and it’s an easy spot to meet up with people.

GP: Do you have a favorite painting or photograph?

Scott: I’m not a favorites guy. I have to say.

GP: Do you collect things?

Scott: My art collection at home is mostly artwork that I’ve either bought or traded with friends or artists that I’ve shown at the gallery, or that people have given to me as a gift for an occasion or thank you or whatever. So almost all of the artwork at home on my walls, I know that person personally. To me, that’s what I collect. That’s my favorite stuff. I don’t really have like a celebrity artist, like “Oh, I want Chuck Close in here.” To me that would be amazing but…that’s just a weird world for me. I don’t think at that level.

GP: So when you pick artists, how do you decide who to show?

Scott: I’ve done several open calls for group shows. Typically around the holidays, I like to open it up and see what new people I can get. And those holiday shows are like a low price range, like $300 or less, so you’ll get a lot of small work in here and that can lead to a bigger show down the line. A lot of it is just friends of friends. The artists that I like and know and trust that I’ve met here and shown here are great at recommending other artists or recommending other shows and introducing new people. I really enjoy working at that level. I like meeting people and kind of understanding where they’re coming from. 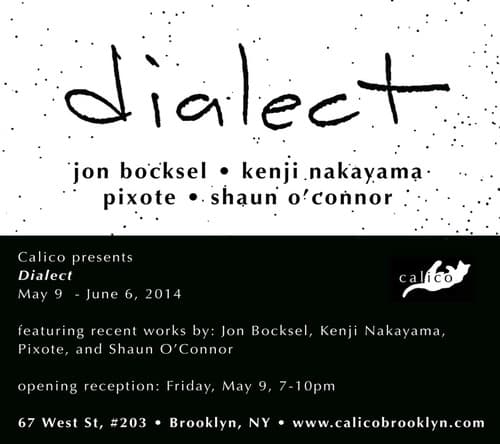 GP: How many exhibitions do you plan on having per year?

Scott: It’s typically a show per month, but in the dead of summer, I’ll take a month or two off depending on how hot or uncomfortable it is. But for the rest of the year, it’s one show per month. It’s pretty rapid fire. A lot of places, a show will stay up a month and a half, two months. But in a room like this, I’m on the second floor and I don’t have a store front. I get my traffic at the opening, and then I open up Fridays and some Saturdays and try to get foot traffic upstairs. But it’s not like a high visibility, walk-by gallery so I think the rotation helps keep interest in the space or bring new interest to the space, just by introducing new artists and new shows every month.

GP: Do you have a type of art that catches your eye more?

Scott: I feel like my tastes drift more towards standard representational paintings, and I’m trying to break that habit. So, the show that’s on the wall right now is fairly abstract for my taste but I love it. I think that these three artists are amazing, and I love how cohesive the show is. I love that its abstract stuff. But you know, there’s enough there to kind of grasp on to and try to make something in your head. It’s not so far-fetched that you’re just scratching your head and wondering what that thing is in the corner. I mean, there’s merit to that and there’s intent, and I get that that’s a whole thing. But I would say that my tastes lean more towards traditional representational stuff, but I’m constantly trying to broaden my perspective.

GP: What’s the move been like from down the hall to the new space?

Scott: I signed the lease here March 1st. I was actually doing one of the art fairs that week when I signed the lease here. So, I didn’t even get to start working on the space until almost halfway through March, when I finally got to get in here and start framing walls, which was a crazy hustle to get all these rooms presentable to install an art show and get people in the space and have it look finished. Meanwhile, the two studios out front had no drywall on the inside. They were just closed, and I was just marketing them as just studios for rent. I had to finish those after the first opening here. I had to finish moving after the first opening here. I wasn’t even done moving the wood shop. It was a crazy hustle. But the big picture, really, it’s already starting pay off. It’s such a nicer space.

Scott: Not for the gallery, I just use my personal.

GP: Do you mind giving that out?

GP: Which artist would you love to have in the new Calico?

Scott: I don’t know what the answer is to that. I’m trying to think. There’s artists that are maybe not known as celebrity artists in the art world per say, but there’s one particular name, he’s a skate boarder who is also a visual artist—his name is Mark Gonzalez. He’s a big influence, and I have a couple of his pieces that I got at a studio sale when I first moved to New York. And he just had some stuff in a space down on Broadway, and I was like, “What!?” You know, growing up he was somebody that I really looked up to, both as a skateboarder and just as a creative, interesting, unique individual. To me, his name sticks out in my head. It’s not somebody that I’d come across that’s selling $250,000 paintings in Chelsea.