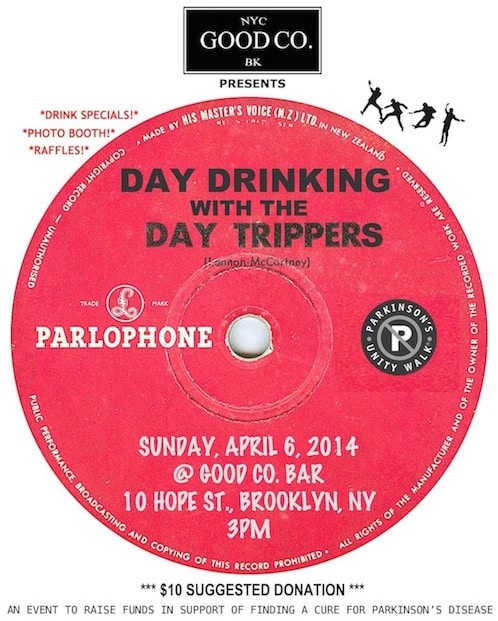 There are few better ways to spend a Sunday afternoon in the spring than meeting your friends at a sweet bar in the neighborhood to have a few drinks. Such an act becomes even more awesome when it benefits an outstanding cause, like fighting Parkinson’s Disease. April is National Parkinson’s Awareness month, after all, so why not?

My fellow Greenpointers, I cordially invite you to meet me just south of the Greenpoint border this Sunday 4/6 at 3pm at Good Co Bar (10 Hope St) in Williamsburg to toast to spring (the sun is supposed to be out!) and help me rid the world of Parkinson’s Disease. We’ll be partying in honor of my mom who was diagnosed with PD in 2008, Marty McFly, and everyone else affected by this silly disease. Drinks will be cheap, fun will be had, and you’ll be able to kick your week off feeling amazing because look at you! You’re making a difference!

Additionally, you might go home with a really awesome prize. I promise you I’ve got a lot of them and it’s all thanks to the incredibly generous business owners in our community who have graciously donated to the cause. Business owners, I applaud you.

100% of proceeds on Sunday will benefit The Day Trippers, a returning team at the 2014 Parkinson’s Unity Walk which takes place every year in Central Park. It’s the largest grassroots fundraiser for Parkinson’s disease research in the country, raising funds that go directly to research and benefit seven major US Parkinson’s foundations.

There is no cover charge, but there is a suggested $10 donation which will get you 5 raffle tickets. All extra tickets are $1 each. Raffle prizes include donations from Williamsburg Cinema, Enids, Primp & Polish, Brooklyn Brainery, Oslo Coffee Roasters, Yoga to the People, Rosamunde Sausage Grill, Gerber Group, In God We Trust, Pizza Loves Emily and Propeller Coffee.

Self Portrait Project is prepared to capture all our do-gooding with a photo booth set-up.

I truly hope to see you there!

More about The Day Trippers