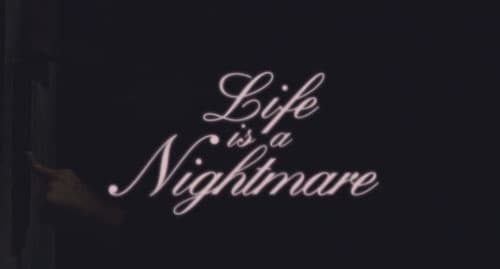 I have cool music videos to share and show recommendations for the remainder of the week, often overlapping from the very same band.

Workout shot the video for “Life is a Nightmare” on India Street, among other locations in Greenpoint and North Brooklyn. The song struts along with crunchy guitar riffs, giving the titular chorus a contradictory feel-good sentiment. You can check the band out tonight at the Stonewall Inn (53 Christopher Street). A party bus will pick up at Bia in South Williamsburg. More details here.

On Saturday, local musician Lily Virginia will release her debut EP via a show at 7 Dunham in Williamsburg. You may recognize Lily’s name from her recent www.greenpointkidsmusic.com event. I’ve had a chance to listen to the EP and think it’s a strong debut. She has a great voice and the dynamics of the music are compelling. Here’s more info about the show – doors at 7:30, show at 8:00 – and here’s the Facebook event page. Lily will be playing with live visuals and hosting other interactive multimedia. Sounds cool to me.

Our site recently profiled the video store Film Noir, but did you know owner Will Malitek also makes electronic music under the name Panoramix? Here’s a music video for the track “We Are Coming,” which was “created using a combination of manipulated still images and bending weird in camera lens flares” according to the press release. It’s striking visually and an interesting listen.

North Brooklyn hip-hop/soul collective Space Captain has a video out for their song “Easier.” What I like most about it is how it captures the band in the room, conveying a vibe of them being relaxed and natural, while also still laying down an assured groove. With the way the camera swirls and the lights, you feel like you’re inside “Easier,” along with the singer. The band will be releasing new music and playing some shows in the near future.

Our last video is from Amy Lynn and the Gunshow. They are gearing up for the release of their debut full length record Don’t Trip on the Glitter, due out 4/29. They’ve put out the title track in the meantime. From the first time I learned about Jackson Pollack and action painting, I have always loved seeing a kinetic, immersive – and yes, messy – artistic process that results in beautiful abstract expressionism. This is the kind of process that works well for a music video, which is exactly what happens here, as Amy unleashes her frustration through paint and glitter. It looks awesome and the song is full of powerhouse moments, both from Amy’s voice and the punch of the band. They’ll be playing some shows around the city in May.