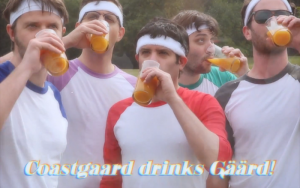 We are in the middle of the full roar of the holiday season. Lots of shopping to do and holiday parties to attend (Greenpointers hosts one tomorrow – come!). Sometimes it’s nice to put on a little music to take the edge off, or see a show to keep the buzz going. Here’s some music I’m digging this week.

This new video from from Coastgaard for “Oval Lawn” really nails the vintage commercial aesthetic. With its fake product inspired by the band’s name and high level of humor, it recalls “Big Me” by Foo Fighters. I always enjoy when a band gets a bunch of other people to sing along to their song. The song is quite a gem, too.

Thursday, if you can’t make the Greenpointers party or want to hop around:

I know I gave them a shout last week for their latest single, but I have to go back to the Hey Anna well once again and share their brand new music video for the song “Dance Until Three.” It features all five members of the band and a bunch more people dancing all over the place. It’s delightful.