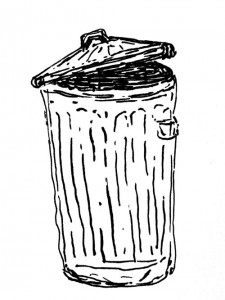 This article made possible by a donation to the Writer’s Fund Raffle by Greenpoint Heights.

While Greenpoint is known for having numerous waste-transfer stations, super-fund sites, toxic releases, the oil spill and the shit tits, recent stories have addressed the neighborhood’s shortage of trash cans.

Both stories – from DNAinfo and NBC NY – focus on northern Greenpoint, around Franklin & Kent. But this shortage is also found on the eastern side of the neighborhood, particularly on Driggs Ave.

I contacted a number of local activists and organizations about the issue:

Ryan Kuonen/Neighbors Allied for Good Growth (NAG)-volunteers
CB1 member Ryan Kuonen spoke about NAG-volunteers’ attempts to obtain trash bins for the neighborhood in 2008. She pointed out that they are expensive – around $1300 each – but said trash was a consistent problem for community organizations and volunteers.

GP: Is the Sanitation Department really the hold up on this issue?

Ryan: The [DNA] article was focusing on whether or not sanitation will pick it up, and that’s the easier hurdle. It’s actually the financing of the trash can. Typically a lot of trash cans are covered by bids or by City Council money.

GP: What happened when NAG and volunteers sought to engage community residents in having more trash cans in the neighborhood?

Ryan: There was pushback from people who lived there, because they were afraid that they would get ticketed if the trash can were overflowing. Which is not the case. And the biggest change since that time period [2008] was all the towers coming up. And so more trash cans have sort of been added to these routs along the waterfront [in Williamsburg].

I think when you get those residential towers [in Greenpoint] then trash cans will be put up all along there. They [the city] don’t plan. They kind of deal with it: once we hit this population max, then we put out the trash cans. It’s about the population amount. Right now [Greenpoint] is under the level, and with the addition of those towers you’ll be over the level at that mark where you’ll have enough people living there to get that infrastructure.

It’s similar to how they do the traffic lights. They’ll put a giant tower in and they know that people will be crossing, but they can’t actually put the stop-light up until they have a count that shows that number of people crossing actually exists. So even though they knew they were going to have to put lights in eventually down here at like North 5th and North 6th because they were building those new towers, they actually had to wait until they hit that critical mass where there was actually that many people on the streets, and then they could do it. It’s sort of a backwards way to plan, because you actually have to have the problem before you can solve it even though you know it’s coming and it could easily be solved ahead of time, but you actually have to wait until it’s a problem.

Strangely enough there have been studies that indicate that more is not better. Some merchants have actually asked us to take away the extra cans from the front of their buildings because people use it to dump.

What is really needed is education in the schools and for the new people moving into the area.

If these Greenpoint streets are changing to more retail, they need to form a merchants assoc. to help deal with it. Bring it to Sanitation’s attention and maybe a new study is warranted to get cans, but arbitrarily cans are not the solution and can be worse when not maintained.

A cleaner city is more than street cans, it is a mindset that too many people don’t have.

OUTRAGE (Organizations United for Trash Reduction & Garbage Equity)
OUTRAGE is another local organization working on this issue, although dealing more with “overall policy of solid waste management in NYC” and using legislation to work towards garbage equity among neighborhoods in a community. Courtney Ranken, from OUTRAGE, wrote:

We do know that the work also begins locally by changing behaviors and habits of our community by promoting waste reduction, recycling, composting, and other forms of healthy and sustainable behaviors, but OUTRAGE’s successes has been mostly around implementing the Solid Waste Management Plan and educating our community on the environmental and health impacts of NYC’s Sanitation.

Caitlin Dourmashkin, Northside Merchants Association (NMA)
NMA has been working on the issue of more garbage cans in North Brooklyn off and on for about two years, particularly through their Keep Williamsburg Clean program. NMA has had some success in trying to get community involvement and investment, and has been able to raise the funds – $4,000 yearly – to have a summer sidewalk cleaning team on Bedford Avenue, between June and September.

Dourmashkin agreed that petitioning the Department of Sanitation is not all that effective because the Department claims there is not the foot traffic to warrant the new trash cans – even though the neighborhood is close to reaching that point. But we must wait until the crisis is totally upon us before they will act to address the issue.

She also pointed out that North Brooklyn has services that were designed for a small residential community, not the ever-expanding population that continues to grow the need for more services – including the bar and food scene, which attract so many tourists to the neighborhood who are not always going to seek out a far-away garbage can for their now useless paper trays, cans, and other discards.

Possible solutions Dourmashkin offered included a mechanism by which new and large business neighbors would invest in the community with the purchase of new trash cans or sidewalk cleaning services, as a way of welcoming themselves to the neighborhood. Also, Caitlin thought that public investment in the problem, by the city, would be most welcome, instead of private individuals and groups seeking private solutions to the public problem.

But for the present volunteers and good citizens will have to seek out ways to deal with the problems created by an ever-expanding population.

(Thanks to local activist Alan Minor for his help in gathering information for this article.)

Help write/make Handoutzine.com; Boulevardiers, a novel based on the industrial history of Greenpoint: part of Arts & Culture Committee, Brooklyn For Peace; support the Greenpoint Soup Kitchen! @jlchaffee
View all posts by Joel →