When I arrived at the door, flying solo with a bottle of whisky for Daniel and a bottle of wine for me (it’s BYOB), Daniel walked out, looking cool as a cucumber with his white apron on and a confident smile. He got this.

He read my message on the whiskey bottle back to me, “You did it. Now feed me!”

“Yeah right, he is probably at Fette Sau,” Daniel said. 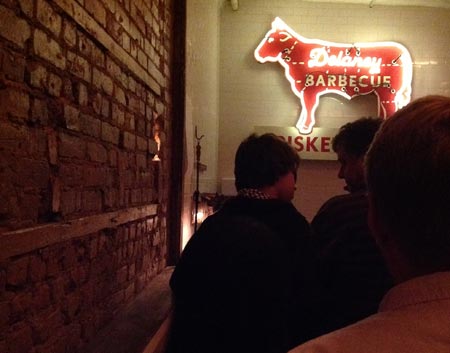 I walked into a gorgeous space designed by Evan and Oliver, the brothers behind Paulie Gee’s, Donna & Manhattan Inn. On the right an old time band welcomed me in. On the left friendly bartenders served beer from a beautiful wooden bar that led me naturally to the line for the brisket, which Daniel will give you a taste of as he weighs out your portion in front of a Delaney BBQ neon sign. It was melty meat. He was owning it. 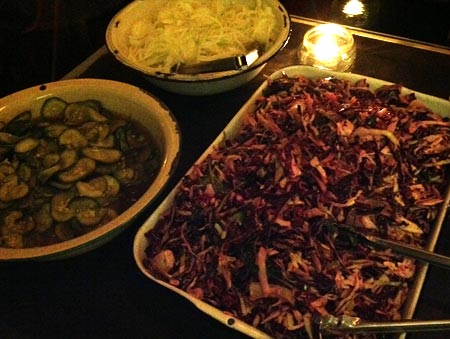 Onto the sides station. The lovely server piled raw white onions, sweet pickles and some of the best red cabbage slaw I’ve had, with not too much mayo, cranberries and some basil onto my tray with a slice of white bread.

The slaw was delicious and intriguing, but I was there for the brisket. I grabbed a seat at one of the casual tables and dug in with my plastic knife and fork.

Jon told me (he’s from Florida) the brisket should be juicy and flavorful. Check and check. The outside was perfectly crispy and caramelized and it was really happy with extra hot sauce. And the ribs – the ribs were perfect, transcendental ribs, meat falling off the bone, sweet and tons of smokey flavor. I can’t wait to go back with my man!

Get there, get some brisket!