Soon after I adopted Greenpointers, I took a class at Flux Factory, which I renamed: “Interviewing Not Like a Monster.” I’m abrupt, I interrupt, I don’t listen and I wanted to learn how to ask difficult questions with some tact.

We were to choose an interviewee, bring in questions, then during class we paired off and conducted the interview as a role playing exercise. 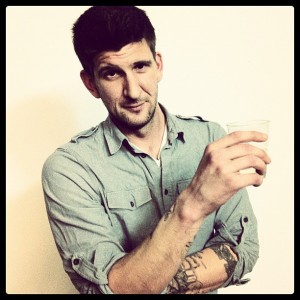 The man in the photograph is not Cody Utzman, owner of Papacitos, Cafe Royal and Brooklyn Standard, but his stand-in. I had never met Cody formally, just some hellos at Cafe Royal, but I certainly had a lot of second-hand information to go on that I prepped my fake Cody with.

Fake Cody took it and ran. He was snide, cocky, rude, and full of himself. These adjectives had come out of the mouths of many Greenpoint folks, often unsolicited, and when asked many admitted to never having met the guy.

Which is why Cody Utzman became an intriguing character to me. All I wanted was to get in his face and blurt out that tough question:

The morning we met Cody would be covering for the chef at Papacitos. We sat across from each other and I was delivered a colossal dish of fresh granola with yogurt and fruit. Cody shook his head, “Jesus. Oh my God. Are you serious? This is enough for seven people. You’re going to be regular.” His cook was trying to “make it special.” 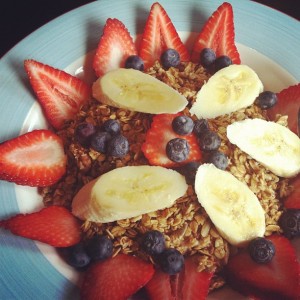 I live on the other side of Greenpoint and am a daily patron of Cafe Royal and enjoy the Turkey Avocado sandwich from Brooklyn Standard, but to be honest, I ate a Papacitos once and wasn’t blown away.

Cody told me that all three business have been completely revamped. After recovering from a complete shut-down of Cafe Royal last year and brightening up Papacitos with a new paint job to get away from what he described as a “teenager’s basement” look, he began “listening to the response from the neighborhood and listening to yelp reviews,” and realized he needed to improve customer service, an area he admits is not his strong point. With new management in place he decided to simplify and “do five things really really well rather than fifteen things,” in order to focus on quality. Specifically with Papacitos, this meant to make food fresh every four hours with little reheating and get back to the original concept which was written on the menu: “Fresh Mexican Food Made From Scratch Daily.”

My granola was delicious and I look forward to giving the new menu at Papacitos another taste soon.

Enough about the food! I was there to get down to the nitty gritty, right? Take it easy. It wasn’t about getting him into a headlock. The word of the day was change, even for me. I would do my best to listen and not back the man into a corner. We’d already talked about the improvements he made to his food businesses and when the time was right we would debunk his mythical reputation and maybe explore some changes in his personal life as well.

Cody feels like he had a lot to do with the change here, in a good way. When he moved here in 2005 from the west coast, the only places to go were Mark Bar and Lamb & Jaffy. The later has since closed. It was after Brooklyn Label’s success, a restaurant Cody opened with former business partners, that he noticed the neighborhood take off.

After the local spot received a Time-Out Best Brunch Award in 2007, “with 600 people at the door on a Saturday,” it was then he noticed all the businesses opening along Franklin. First Dandelion, then Dalaga, then Alter, he remembers. He described that “people were coming to Franklin for Brooklyn Label from outside the area and being drawn there … and it built upon itself.”

If Cody is ahead of the curve, can we expect the same change for the McGolrick Park area, where Cody now lives and where Cafe Royal and Brooklyn Standard are located?

On the “other side of Greenpoint” Cody describes it as having a “different kind of pace, more families, more people interested in getting up early and going jogging and going to the park, which is more my lifestyle now than it was when I lived on Green St, and wanted to go to all the bars till four in the morning. You won’t catch me dead doing that now.”

It is the moment we have all been waiting for. 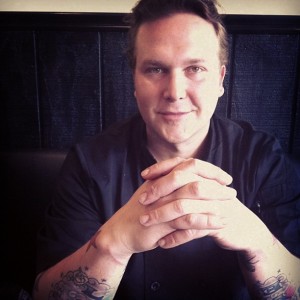 Maybe it was that Green St. Cody everyone was talking about. The man who was sitting in front of me was a friendly, intelligent, professional and focused business person who is passionate about food and Greenpoint.

But I still had to ask.

Listening to the recording of the interview, I realize why I am so direct. I hate skirting around questions, and in this case, I did. They call it diarrhea of the mouth. I was afflicted, but he got the gist of what I was asking. His ears buzz, no doubt.

GP: “What do you think it is that makes so many people have this opinion about you?”

Cody:  It’s a really good question because I feel that to and I know that very much so. My dad always said to me you know a person from the day you met them moving forward, so if I ever wronged anybody, or did this or that, sure whatever, if I’ve slept with your girlfriend, (laugh) don’t put that in (laugh).

There was a time period before I opened up my first restaurant and definitely when I opened my first restaurant where I was young, I was immature, I lived in NYC with a pocket full of money from when I had been a private chef, I partied my ass off, I lived the rockstar lifestyle, I had no cares in the world and pretty much I let you know it, too. Pretty much I didn’t give two shits about what was going on and I lived my life like there was no consequences and then after I opened Brooklyn Label I was pretty high on the hog, and thinking shit, I did so good. I think I had an edge to me that was cocky and so I think that is where that comes from.

But that was 2007 prior. We are now in 2012 so if you are still butt hurt about something that happened back then, you need to get over yourself. Big time. Because I sure as hell don’t remember or I am a totally different person.

At the end of the day I am good at what I do. I am not apologetic and I don’t think I have to be.

GP: How have you changed?

Cody: The difference is I was in my late twenties and I’m in my mid-thirties now … That was a rough rough time in my life. When I first moved here I was going through a divorce. I was having to work with my ex-wife’s parents at Brooklyn Label. I had a shitty existence and I wasn’t happy, as a person. I was out drinking and partying and having fun because I wasn’t happy.

Cody: Yes, I have been happy for a long time … I have what I want. I take care of myself. I do things for me that make me happy. I won’t take anyone saying I don’t deserve what I have. I know what I worked for.

When I left Brooklyn Label that situation was a big turning point for me. That is where the shift happened for me. I had been involved with a woman and my investors there for a ten year period and when I left there I left every single thing behind. I was thrown on my ass. He showed up one day and said you’re out. My apartment was under the Brooklyn Label lease, my car was under the Brooklyn Label lease… and I was all of a sudden homeless, didn’t have a job and had two suitcases worth of shit. And that’s it and no money.

I was tied to this family. I had not grown on my own as an individual. I met this woman when I was 21 years old and basically moved in with her parents for a ten year period. When I came here to start Papacitos it was with $10,000, with nothing. I was sleeping inside the restaurant. I purposefully got rid of every single thing that wasn’t mine so now I can say I earned this. It was important for me to become my own man. And through that process I definitely have changed. And now even more so.

The responsibility I feel after my Dad passing away is huge. I am filling his shoes and taking a major role in my family life… And I want to have a family and I want to have kids. It makes sense to me now. There is a big difference from where I was seven years ago.

Had the I met Cody in a bar back then and asked him the unfiltered version of my question, this article, though possibly more entertaining, might not have been so sincere and candid. A good interview is like a good portrait: open and honest. It was a challenge, no doubt, but a breakthrough for both of us.