Ophelia’s a sough-after gal — flower-bearing maiden, Shakespeare dream role, and subject of countless works of art. Now, Williamsburg gallery Lucas Lucas (57 Conselyea Street) puts a contemporary spin on the classic character in their new exhibit named after Hamlet’s steadfast girlfriend. With aquatic and floral visions expressed in photographs, paintings, and more, Ophelia (I feel ya) offers artists and spectators myriad ways to experience and contextualize this ill-fated but beloved character. Plus, the works are all by women!

Take a look at some pieces below, and stop by the gallery before the exhibit closes on October 7. Or visit here to support and purchase local art.

Shakespeare in the Popup Park Kicks Off Tonight (7/25) [UPDATE: Cancelled Due To Weather] 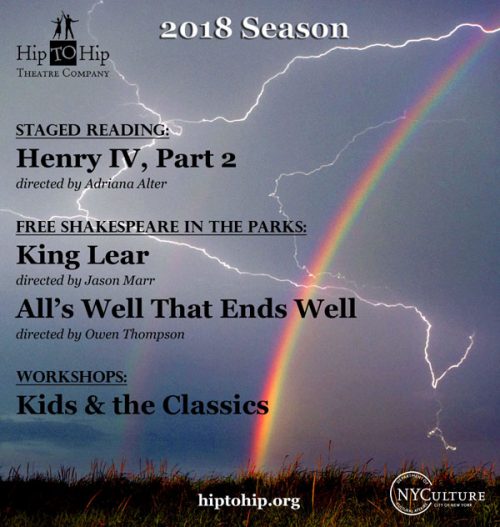 Central Park might have the Delacorte Theater, but north Brooklyn has Bushwick Inlet (popup) Park, and the good folks at Hip to Hip Theater Company are turning the provisional green space at 50 Kent Avenue into a makeshift Globe Theater this summer.

Hip to Hip will stage All’s Well that Ends Well tonight, and King Lear on August 22nd. Each performance will begin at 7:30 and run 95 minutes. An interactive kids workshop will begin 30 minutes prior to showtime.

Tickets are not necessary; blankets, low chairs and picnic fare are encouraged!

What: Shakespeare in the Popup Park
When: [CANCELLED] Tonight August 22nd at 7:30pm
Where: Bushwick Inlet (popup) Park, 50 Kent Avenue

UPDATE: Tonight’s performance has been cancelled due to the rain. Check out King Lear on August 22nd.

The bloody weather has rained out tonight’s performance of All’s Well That Ends Well. Please check out King Lear at 50 Kent on 8/22.

Cymbeline is tonally ambiguous, dramaturgically elusive. This is no weakness of Shakespeare’s so-called tragedy, but it stands out in being one that ends in reunions and discoveries instead of wars and death while featuring beheaded characters and disguised lovers. It’s no wonder, then, that critics have long debated whether Cymbeline is drama, romance, comedy, or something in between. Perhaps Shakespeare was pushing genres out and contemporary storytelling, with its mix of laughter and catharsis, forward. Regardless of category, Stay Awake! Theatre’s production of Cymbeline at The Brick (575 Metropolitan Ave.) in Williamsburg is firm in its footing thanks to its minimalist approach and rather strong performances. END_OF_DOCUMENT_TOKEN_TO_BE_REPLACED