For years the local Memorial Day Parade was a big event. Hundreds of people came out to honor the veterans who fought and sometimes died defending the country. However, last year the Memorial Day Parade was canceled. In the past, Greenpoint had many veterans and organizations like the American Legion and the Veterans of Foreign Wars were large active organizations. Today, though, there are too few committed local veterans to stage a parade.

Many of the older veterans have died off and many of the younger people who have moved into the neighborhood have never done military service. Memorial Day is now more about barbecuing than recalling our nation’s veterans, but Memorial Day is not the only parade that has disappeared. Here’s footage from the 2015 Greenpoint Memorial Day Parade for those who have not witnessed the parade before:

END_OF_DOCUMENT_TOKEN_TO_BE_REPLACED

The New Warsaw Bakery will be moving to a new location, after 20 years on Leonard. We will miss the smell of fresh baked bread wafting down the street, but luckily they’ve promised to keep the family business alive elsewhere (maybe even another spot in Greenpoint).

We also got a disturbing piece of news: an unidentified buyer snapped up a large development site on the waterfront, known as 49 Dupont Street, meaning that an additional 3 residential towers could be built there (that’s in addition to the 10 Greenpoint Landing towers).

On a happier note, the NYC beaches open for the Summer Season this weekend! We got word that Rockabus won’t be running this year, but you can still take the NYC Beach bus to sandier shores (starting 5/26) and apparently they give you free Sixpoint on your way. END_OF_DOCUMENT_TOKEN_TO_BE_REPLACED 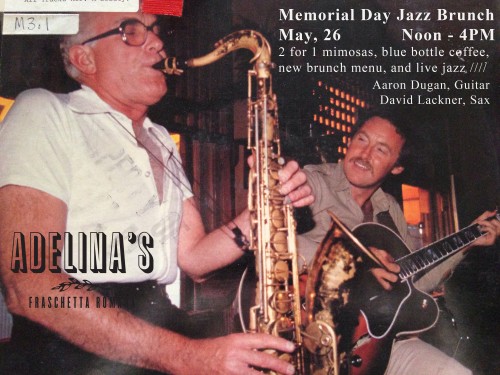 What’s the best part of a long weekend? An extra day of brunch. That’s why we’re very happy that Adelina’s is throwing a super festive brunch in honor of Memorial Day, which will be accompanied by live jazz (from12-4pm). That’s right, they’re having a JAZZ BRUNCH, which we whole heartedly support and recommend attending after you watch the parade swing down Manhattan Ave.

AND there will be 2 for 1 organic prosecco mimosas all weekend (made with fresh squeezed OJ). If you can’t make it on Monday, brunch will strill be going strong Sat & Sun. Adelina’s will also be introducing some new menu items to their already swell menu, including fresh juices, vegan waffles and a delicious-sounding salumi & scrambled eggs entree. YUM. Enjoy.