Arepas Tonight At The Diamond!

The series of international pop-up dinners at The Diamond (43 Franklin Street) continues tonight with chicken and veggie arepas from El Jefe’s Nachoria. This winter, every Thursday from 7-10pm they’ll feature a different international cuisine. Tonight’s menu also features chips with three types of salsa and a warm brownie. Get ’em while they’re hot!

For all you Halloweeners out there, here are our top picks for some fine spine chillin’ in North Brooklyn. Whether you’re in the mood to dance the night away with DJs, see rad costumed cover bands, freak out at scary movies, compete in a costume contest, take a zombie terrarium class or participate in a basement seance, our neighborhood has truly an abundance of choice this year.

GIF-O-Ween at Brooklyn Bazaar
Sponsored by GIPHY and presented by Animation Block Party, GIFOWEEN is a Halloween-themed animation loop contest!
This party will feature the official launch of GIPHY PRESENTS: GIF DANCE PARTY, a fully immersive dance environment that allows you to finally become dance partners with all your favorite online characters at once!
Brooklyn Bazaar | 150 Greenpoint Ave.
8pm-12am, FREE, Costumes highly encouraged
RSVP on Facebook

END_OF_DOCUMENT_TOKEN_TO_BE_REPLACED 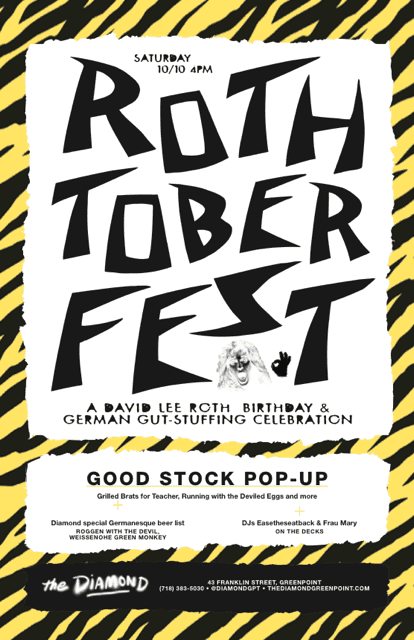 Don’t have plans for Oktoberfest? How about rocking out to Van Halen tunes over some tasty brews at The Diamond  for Rothtoberfest?

“Diamond” David Lee Roth turns 61 and given that the Diamond is named in honor of him, it’s a holiday they take very seriously. So tomorrow (Sat, 10/10) starting at 4pm, come through The Diamond (43 Franklin St) for food, booze, and an alternating set from Van Halen, German metal, and of course traditional German Oktoberfest tunes.

END_OF_DOCUMENT_TOKEN_TO_BE_REPLACED 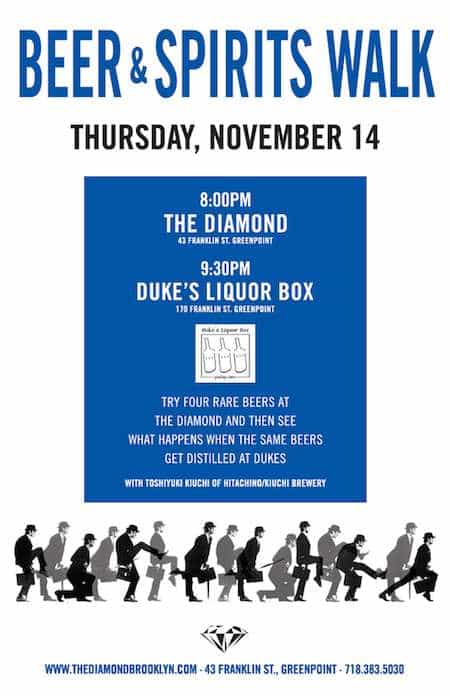 At 8pm taste several rare beer The Diamond (43 Franklin St) for FREE before following the crew down to Duke’s Liquor Box to try distilled versions of the same products, with light hors d’ oeuvres.

Ever wonder about that little triangle of land on Nassau in Greenpoint with the “Golden Nugget” RV on it? And who the hell lives in there? You can meet the “caretaker” this Sunday!

Center For Investigative Research, “an ad-hoc collective dedicated to searching out the true facts and deeper meanings behind everyday phenomena in Brooklyn and beyond,” is hosting a salon on Sunday February 17th, 2013 at Diamond (43 Franklin St) from 5-7pm, which aims to answer all your questions.

“The tiny triangle of land bordered by Banker Street, Nassau Ave, and North 15th, at the border between Williamsburg and Greenpoint, is an enduring Northside mystery.  A sea of old-world chaos in the midst of a plague-like profusion of high-end beer gardens, supermummy sanatoriums, yoga studios, and Apple-product saturated co-working spaces, this tiny space beckons the passerby with a nostalgic, disorganized filth all but absent in today’s Brooklyn. While the “Golden Nugget” sign on what appears to be a food wagon hints as some comestible design, the deeper story has remained tantalizingly elusive—until now.

Come meet the caretaker of this semi-conscious urban installation, and hear about his ambitious plans for a restaurant serving animal-shaped children’s sandwiches, plexiglass-clad indoor ice-rinks, and an Azerbaijani spit-roasted lamb festival.  While we cannot tell you his name, you can be sure his raconteuring skills are legend…”