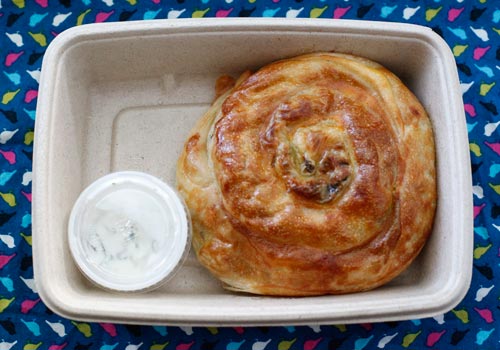 While picking up special cat food for my obese tuxedo at Greenpoint Vet Hospital, I grabbed a coffee across the street at Cafe Pistachio (114 Nassau Ave), which contributor Jen H. raved about a few months ago.

It was late in the afternoon and the drip coffee looked like it had been sitting out all day so I ordered a short espresso, which was way too long and not something I would go back for. I did notice something I would return for, though.

For a while I’d been very curious about Borek after seeing the frozen variety at a European deli. (I’ve also seen it spelled Burek.) The Borek on display at Pistachio looked fresh and delicious and since we were starving it was a great take home appetizer before cooking dinner. The server said they make them in house, too.

There were a few varieties to chose from: cheese, potato, ground meat and spinach, and I went with Spinach. It was a flakey, buttery and moist phylo dough pastry stuffed with spinach and salty feta, served with dill sour cream on the side. It was really satisfying and makes for a really cheap snack or small lunch at only $4. That is cheap!

Can you recommend any other spots in Greenpoint for delicious Borek? 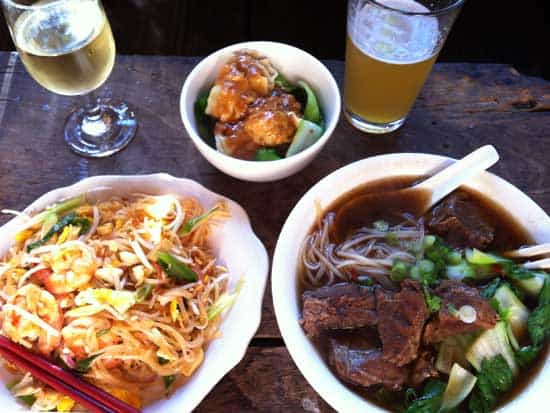 I’d heard about the ramen in the basement of No Name Bar but never made it down. Now they have a full Thai menu, and it’s delicious and cheap!

When friends want to go out for Thai I usually go, “Meh.” Not because it isn’t a delicious cuisine, it’s just that ever since it became a food trend and every neighborhood got a thai place, most were just that, meh.

When I read in Paper that the recipes were based off chef Nam’s grandmother’s Bangkok cooking, I had to try it. END_OF_DOCUMENT_TOKEN_TO_BE_REPLACED