Beer Street: An Ode to Beer 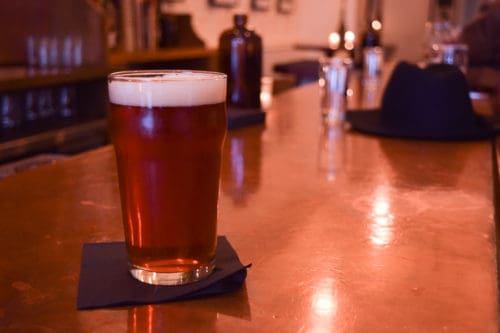 To the beer snobs,

and those of good taste.

If this bar had a theme song, it would be The Doors’ inimitable anthem to the odd “People are Strange.” Beer Street at 413 Graham Avenue embraces the bizarre. Their ever present sidewalk sign reminds me as I walk home from the L to “drink weird beer.” It was no accident that they were twice selected as one of the top 100 craft beer bars in the country. The narrow, intimate bar’s tastefully simple white-washed brick walls contain an atmosphere gentle and welcoming in a way that New York bars often lack. Décor aside, the best part is that this expertly curated beer bar operates without a hint of pretension. The bartenders will happily advise, educate, and guide a neophyte but never condescend. This is a different, elevated kind of service than other craft beer spots are offering and you can enjoy it without the fuss of other places (because that’s just not how we do things on Graham!). END_OF_DOCUMENT_TOKEN_TO_BE_REPLACED

END_OF_DOCUMENT_TOKEN_TO_BE_REPLACED

The History of the Greenpoint Growler

Many Greenpoint beer afficianados these days do not drink cans or bottles of beer. In places like Beer Street (413 Graham Avenue), One Stop Beer Shop (134 Kingsland Avenue) and Brouwerij Lane (78 Greenpoint Avenue), drinkers quaff growlers of beer, but the growler is nothing new in Greenpoint. It has a long local history.

There is no clear idea of where the term growler comes from. A growler has been defined as:

Growler: A pitcher or other vessel for beer, 1885, American English, of uncertain origin; apparently an agent noun from growl (v.)

In early days the expression “work the growler” meant go on a spree. An article from the Brooklyn Daily Eagle in the 1880s describing the gang-infested Greenpoint area between Ash and Eagle Streets known as Dangertown (gotta love the name) reported that the local gangs robbed people to get money for the sole purpose of “working the growler.” END_OF_DOCUMENT_TOKEN_TO_BE_REPLACED