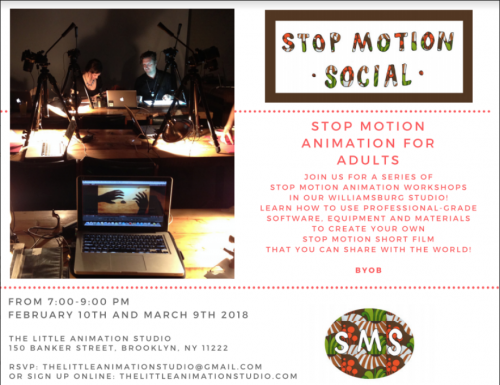 END_OF_DOCUMENT_TOKEN_TO_BE_REPLACED

“What If Brooklyn Was a Cartoon Character?” Conversations with Daniella Urdinlaiz

Daniella Urdinlaiz is a Greenpoint-based artist specializing in illustration, animation, and design. From her drawing desk she’s created worlds that have traversed the internet realm onto films, websites, and blogs such as Thought Catalog, working as their primary visual artist.

“I’m drawn to people and things that are strange and bizarre to me,” she exclaimed as I stared at the rubbery octopus tentacle on our plate by the bar top of Alameda. Over shiso cocktails, the storyteller shared a bit of her own story, from her Catholic school upbringing in Miami to dreams of having her own cartoon show. END_OF_DOCUMENT_TOKEN_TO_BE_REPLACED

I had a great time at the very first Picture Farm Film Festival last year (which I previewed and recapped for Greenpointers). I am looking forward to attending this year’s edition. It takes places this weekend, Saturday 2/7 and Sunday 2/8. I highly encourage you to come see a bunch of great films for free at the Picture Farm Gallery (338 Wythe Avenue). To get you excited, read on for more information and some interviews with the festival organizers and some of the filmmakers. END_OF_DOCUMENT_TOKEN_TO_BE_REPLACED

Watch: An Animated Tribute to One New Yorker’s Apartments

In “Places of Residence,” Julie Reiters smartly animates each of her New York apartments, the last and best of which just so happens to be in Greenpoint. The video perfectly encapsulates the little oddities that make renting in NYC such a singular experience, i.e. the joys of paranoid neighborhoods, illogical floor plans, and 6 floor walk-ups.

Makes you think about your own apartment history, doesn’t it?

Greenpointers recently had a homemade cappuccino with Brooklyn based illustrator and motion designer Richard Borge. Richard has done work for everyone from The New York Times to The Village Voice. He has a show, Objects Found and Claimed, opening May 16th at Rourke Art Museum in Moorehead, Minnesota. And yes, he makes a tasty cappuccino. END_OF_DOCUMENT_TOKEN_TO_BE_REPLACED

I’ve had buttermilk on my mind ever since my friend sent me this clip of the now semi-famous rambunctious ruminant–‘Buttermilk‘, a Nigerian dwarf goat playing with her friends. ‘Buttermilk’ plays by her own rules, sure, but what was foremost on my mind as I thought about her was where does she get that energy!? Oh, to have the where-with-all to bounce about with carefree abandon like a tiny, short-legged goat on a Maine dairy farm. What would it take? Hard drugs? I say hard to get!

Perhaps something as easy as a summer salad with homemade dressing can give me “the Buttermilk bounce.” So I mixed up this spicy buttermilk dressing, covered my salad with it, and went on a rampage. I ran out the door and down to Transmitter Park where I chased a flock of pigeons around for ten to fifteen minutes (with zero fatigue, mind you), then zipped up to the corner, stole a frozen Snickers from the deli just for the thrill of it (I don’t even LIKE snickers), then bought all my Christmas gifts for 2013 (I could no longer pass up those beckoning summer sales on Franklin St). Finally, I ran over to the basketball court, “buttermilked” my way into a game, slam-dunked the rock, ran home, and reorganized my cutlery.

Knockout Buttermilk Dressing. Go on. Try it. I dare you.

At a glance: Buttermilk is a good source of protein, calcium, potassium, and B12. It’s actually fermented milk, usually made by adding lactic acid to regular milk, so you’ll be getting some healthy probiotics with every serving, which can aid with digestion.

Directions:
With an immersion blender or in a food processor, combine all ingredients until mixture reaches a smooth consistency. Add more salt to taste or jalapeño for kick.

The third annual Greenpoint Film Festival is now accepting submissions for its 2013 event.

This year’s festival, which returns this Fall, is looking for film in the following categories:  Experimental/ Avant-Garde, Narrative, Documentary & Animation.

Last year’s four day festival was a hit and brought together a great variety of films, including several intimate stories that covered many of the concerns and landmarks of our neighborhood and the emotional struggle of urban life.

You’ve got until March 31, 2013 to submit your own film, so don’t delay.   Click here for more information and submission guidelines.