The environmental cleanup of toxins at part of the former American Manufacturing Company/Greenpoint Terminal site is slated to begin this month under the New York State Dept. of Environmental Conservation’s Brownfield Cleanup Program.

Remediation at 47- 53 West St. and 2 – 24 Oak St. will last approximately five months and includes excavation of historic fill, backfilling and construction and maintenance of an “impervious cover (e.g., concrete) or two feet of clean crushed stone,” according to the DEC fact sheet. A community air monitoring plan will also be implemented during the cleanup.

Some site history from the DEC:

The site is 3.98-acres and is bordered on the west by the East River, on the south by Former Consolidated Freightways (BCP Site No. C224191), on the east by West Street, and on the north by Noble Street. It is currently used for storage of heating, ventilation and air conditioning (HVAC) equipment, granite, and flatbed trucks. The site was previously occupied by five separate buildings that were demolished by a fire in 2006. The only remaining structure is an approximately 1,400-square-foot concrete silo, which will remain in place after RAWP implementation. Historically, the site was used as a shipyard, a manufacturing facility, a mill, and the Greenpoint Terminal Corporation facility.

END_OF_DOCUMENT_TOKEN_TO_BE_REPLACED 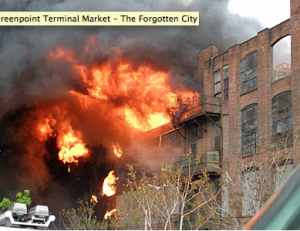 At one point the company occupied sixteen buildings and was Brooklyn’s largest employer with four thousand people, mostly females. The great local writer Margaret Wise Brown’s father was Vice President of the firm, but the majority of the people who worked there were newly arrived immigrant women who worked fifty-six hour weeks for low wages, making rope. Many of the immigrants who settled in Greenpoint first came to work in the plant. Initially, it was the Polish and later in the 1920’s, Puerto Ricans. They were recruited on Puerto Rico and brought here on a special ship. END_OF_DOCUMENT_TOKEN_TO_BE_REPLACED