Laura Apperson is a writer and editor from Atlanta, GA. By day, she works on narrative nonfiction and novels at St. Martin's Press. In her free time, you can find her exploring Greenpoint, reading, or working on her novel.

We’ve already talked about how Newtown Creek is one of the most polluted waterways in the country  (AKA, don’t even think about taking a dip or eating its fish). And while everyone knows this is true, the Department of Environmental Protection (DEP) has reportedly lied about the already horrific water quality in city reports—and former employees have banded together to potentially sue the City of New York. END_OF_DOCUMENT_TOKEN_TO_BE_REPLACED

The pool was originally opened in 1936 by Robert Moses, who was curator for many of New York City’s open spaces and actually opened one pool every week during the summer of ’36, totaling 11 pools for the Works Progress Administration project, with the help of Mayor LaGuardia. At the time of its opening, it was one of the biggest public pools in the world, and is three times the size of a standard Olympic pool. It had a capacity of 6,800 swimmers. Today, officials cap it at 1,500 people. END_OF_DOCUMENT_TOKEN_TO_BE_REPLACED

The city is only one purchase away from obtaining the final puzzle piece needed to complete Bushwick Inlet Park: an 11-acre piece of land owned by Norman Brodsky and Samuel Kaplan of CitiStorage.

Brodsky officially refused the offer on June 11, under the pretext that he can get more money for the property. END_OF_DOCUMENT_TOKEN_TO_BE_REPLACED

The Participatory Budgeting Results Are In!

Earlier this spring, the office of Stephen Levin, Greenpoint’s council member, provided the opportunity for residents to vote for how the district’s money would be used for community projects during the upcoming year.

The results from the community vote are in! Below are the projects that District 33 chose. The ones directly affecting Greenpoint are in bold. As construction information unfolds, check back with Greenpointers for more details. All quotes courtesy of Stephen Levin’s newsletter. END_OF_DOCUMENT_TOKEN_TO_BE_REPLACED

If you’re a driver who parks your car around the neighborhood, you’ve probably experienced the frustration of film crews giving an alarmingly short warning to remove your car before they tow it away. Or maybe you’ve woken up in the middle of the night to noise and bright movie lights on your block.

According to the mayor’s office, film crews are required by law to inform the community of upcoming productions and post “No Parking” signs at least 48 hours ahead of time, giving New York City residents plenty of time to move their cars—and to plan ahead so they know how long trucks and cameras will be blocking the street.

But the trouble is that “informing the community” technically means the community board, city council, block and merchant associations—not the residents. Though the community board sends emails to residents who ask for them, not everyone gets those emails. And so most people rely on the signs that are often posted too late for them to move their cars in time—even though crews are also required to post “No Parking” signs a full two days before filming begins. END_OF_DOCUMENT_TOKEN_TO_BE_REPLACED

On Thursday, May 5, the Metropolitan Transit Authority (MTA) held its first community meeting to discuss two proposed plans for the Canarsie Tunnel renovation, the final step in the MTA’s Sandy Recovery Work plan and a major concern for Brooklyn residents who use the L train daily.

The first plan, which all officials seemed to favor (emphasized by the noticeably longer “pro” list in the presentation), proposes an 18-month turnaround, with work beginning in January 2019 and ending in July 2020, and requires a complete shutdown of the L train from 8th Ave to Bedford Ave. The train would run as normal from Bedford Ave to Rockaway Parkway. This plan would give the agency more flexibility with contractors and would get the work done as quickly and efficiently as possible. 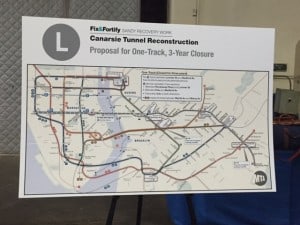 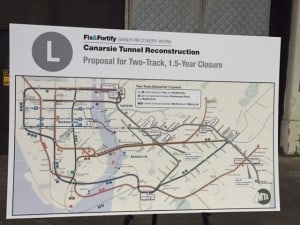 The second plan, which would take three years, would leave one tunnel open, allowing the train to run at 12-to-15 minute intervals from 8th Ave to Bedford Ave: only 20% of the current level of service the L train provides. There would be no train service at all between Bedford and Lorimer, with a shuttle bus as an alternative. Service would run as normal between Lorimer and Rockaway Parkway. END_OF_DOCUMENT_TOKEN_TO_BE_REPLACED

On May 5 at 6 p.m. at the Marcy Avenue Armory, city officials will be hashing out the details for the impending L Train Carnasie tunnel repair work that has Greenpointers and New York City residents alike worried about future transportation options in and out of Brooklyn. END_OF_DOCUMENT_TOKEN_TO_BE_REPLACED

From March 28-April 3, Greenpointers can vote for or against many proposed neighborhood projects for District 33—which includes Greenpoint, Williamsburg, Brooklyn Heights, Boerum Hill, Williamsburg, DUMBO, and Vinegar Hill—giving residents a say in how the district uses its yearly budget.

The ability to vote on how the district uses its money is called Participatory Budgeting, and it gives residents the opportunity to speak out about which projects are important to them. Greenpointers will vote at the Greenpoint Library on Norman Avenue. You only have to be a resident of the neighborhood (not necessarily registered to vote) to cast your ballot. END_OF_DOCUMENT_TOKEN_TO_BE_REPLACED

From my first handshake with Lucky Lee, vice president and founder of Lucky’s Real Tomatoes, it was immediately apparent to me how important her team was to her business. Before she started talking about her tomatoes, she introduced me to her team and gathered everyone together for a group photo.

“One person doesn’t make a company like this — it’s a team of people,” Lee said, referring to not only those who work in her facility on Meserole Ave., but also the family members and employees at her Florida and North Carolina farms and facilities. “Our team can make it through anything.”

It’s this team that has made Lucky’s Real Tomatoes so successful and carried the company through major setbacks like Hurricane Sandy, which required the company to completely rebuild its Greenpoint facility. Since Lee and her sister drove a truck of fresh tomatoes from Florida to New York City in the middle of winter in 1978 and founded Lucky’s with her brother and CEO, Alan Marcelli, she’s had a consistently growing client base of chefs who are eager to have quality, field-grown tomatoes—many of whom have been Lucky’s customers for over 30 years. END_OF_DOCUMENT_TOKEN_TO_BE_REPLACED

Recent city investigations have revealed new information about two major health concerns for Greenpoint residents: details on the contaminants—and the plans for clean-up—in one of the nation’s most polluted waterways, Newtown Creek; and the locations of and possible health problems associated with Monsanto’s potentially cancer-causing Roundup, which can be found in many of Greenpoint’s green spaces.