Did you know that there are one million species threatened with extinction? This Friday, May 17th is Endangered Species Day and Kingsland Wildflowers (520 Kingsland Ave) is hosting a free screening of the documentary film Paris to Pittsburgh, which “brings to life the impassioned efforts of individuals who are battling the most severe threats of climate change in their own backyards.”

Green roof tour will precede screening. RSVP here to attend. Snacks and refreshments will be provided. 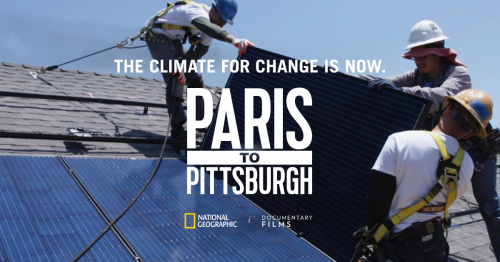 “Set against the national debate over the United States’ energy future – and the explosive decision to exit the Paris Climate Agreement – ‘Paris to Pittsburgh’ captures what’s at stake for communities around the country and the inspiring ways Americans are responding.”

Join Kingsland Wildflowers during Endangered Species Day for a special screening of this documentary film co-directed by Sidney Beaumont and Mike Bonfiglio. Narrated by Emmy Award-winning actress and activist Rachel Brosnahan, the film explores the national and worldwide effects of climate change and celebrates how Americans are demanding and developing real solutions to reduce our carbon footprint. The film is produced by Bloomberg Philanthropies and Radical Media and presented by National Geographic.

Community space and rooftop habitat for plant and wildlife to encourage conversation and education around NYC conservation efforts. With the help of wildlife experts at NYC Audubon Society and property owner, Broadway Stages, the 520 Kingsland Avenue warehouse into a beautiful urban green space.