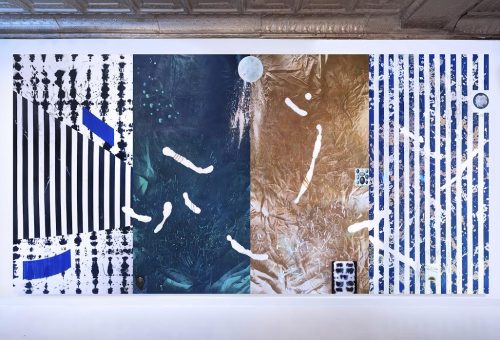 Gail Stoicheff has been painting in the nabe for over a decade, crafting quietly epic paintings with sweeping strokes and stunning visuals. For this week’s Thursday Spotlight, we chatted with the local painter to discuss how her heritage affects her work, the decision to pursue grad school, and — most importantly — the recipe she needs to have.

Greenpointers: I see you’re based in Greenpoint. How long have you been here, and do you work out of a local studio?

Gail Stoicheff: On Valentine’s day 2002 I moved to Williamsburg. When they tuned our loft into condos in 2011, I moved to this side of McCarren. My studio is in my apartment, which is tricky since I make large work, but I’ve found I need to have a live/work set-up. There aren’t many options for that in the neighborhood these days, so I make it work.

GP: You’re represented in NYC by Catinca Tabacaru Gallery. Can you describe your artistic relationship?

GS: Catinca’s committed to facilitating an artist’s vision no matter how untenable it may seem, which is maybe unusual with the financial strains in a young gallery. I made a 19-foot painting for my recent show — it had velvet, it had fringe, it had tie-dye…a solo show is a chance to really go for it, and that’s often not even slightly commercially viable. She was fully supportive from the start. That kind of trust is needed and very greatly appreciated. 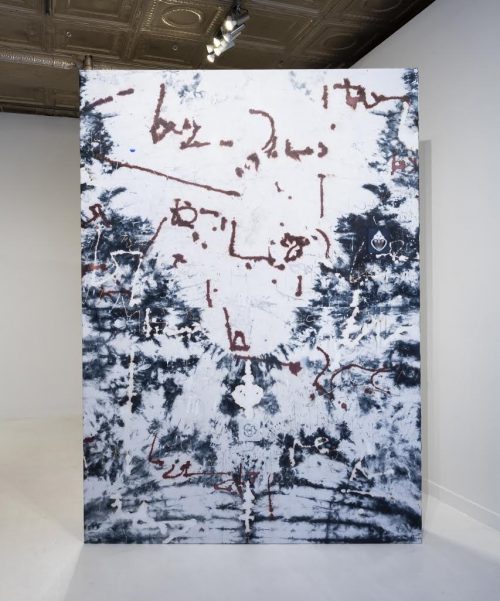 GP: I saw how in your recent CTG show, “Little Miss Strange,” much of your work was grounded in your Greek heritage. Can you expand on this?

GS: It’s a jumping off point for me; my father’s side of the family is Greek. As a little kid in the 80s I was super infatuated with the characters of Greek mythology. It was the perfect storm of my family history, “Battlestar Galactica” and “Clash of the Titans,” both of which seemed to be in constant rotation on TV at the time. Plus, you could just look up in the sky and see the characters as constellations — Cassiopeia, Orion, etc. As a kid, when you hear these fantastical stories and then you can actually observe things…it becomes quite magical. At that time, of course, I thought the whole thing was just part of my own history, I didn’t realize versions of it were shared through all cultures. After you learn about all the overlapping mythologies of the world, it becomes even more fascinating. The stories are still relevant, humanity never really changes; nothing is old, nothing is new. My obsession continued over the years but I only recently embraced it in my work. I think we tend to talk ourselves out of things that come too naturally, but now I see that’s what’s valuable about it.

GP: Do you have any upcoming projects you’re excited about?

GS: I’m working on three large paintings to show in Miami with Catinca in December, and a big show in LA with Lauri Firstenberg in 2019. Painting lets me go off on unexpected tangents, like solar power. I often put things in and on the canvas — fringe, ruffles, plaster objects, and I’m making a solar panel-powered light to go on one of the Miami pieces. Now that I understand the technology, I’m lighting the studio with solar power. The sun and Apollo (the sun god) have been a huge theme in my work lately, so it’s coming full circle. I’m super into it. 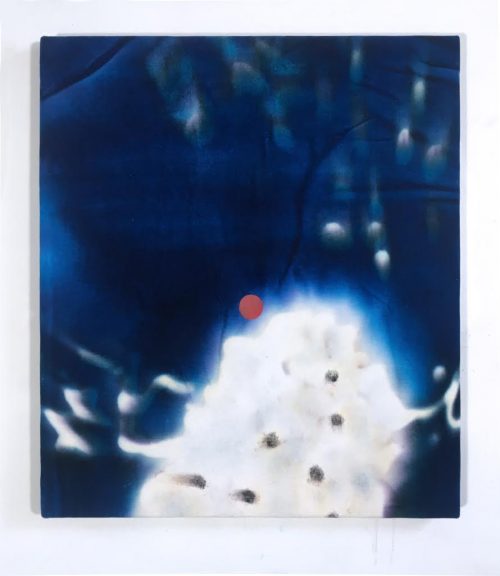 GP: You attended grad school at Bard. Many people in the arts question seeking higher education or diving straight into their desired field. Can you discuss your experience, if you’re open to it, and how it perhaps shaped your career?

GS: Bard was a pastoral dream…mixed with moments of sheer terror for an introvert like myself. I think it’s a model for the future of graduate studies in the arts. But ultimately the only thing that matters is your obsession/commitment level. Being a painter is a way of life; if you need it to be your way of life, you will make it so. If you don’t need it to be, it will almost certainly fall away, no matter how much or how little education you have.

GP: Anything else you’d like to add/wish you’d been asked?

GS: If anyone knows the recipe for the sweet and savory Brussels sprouts at Five Leaves, DM me. Very serious. They only have them on the menu in fall/winter and I need to eat them all year. Nothing I have come up with compares. Greenpoint come through!