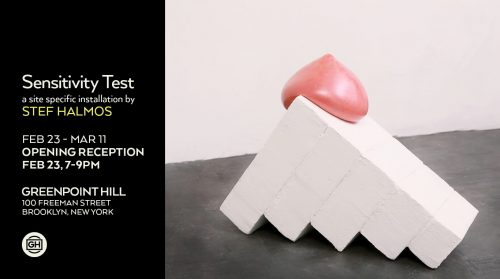 From feminist sculpture to new wave sculpture to transgressive films to a one-man performance of the movie Titanic (phew!), North Brooklyn is coming alive this weekend with fun and edgy art and theatre. So peel yourself away from Netflix one of these cold nights and head on out to these spots!

Artist Stef Halmos is taking over Greenpoint Hill’s entire storefront and gallery for a special two-week site-specific installation. She “works to alter perceptions of the way women inhabit space, display grandiosity, and generate power by using and (misusing) traditional sculpture techniques and materials to create work that appears frivolous and pleasurable, while simultaneously triggering a sense of discomfort and confusion in the viewer.” 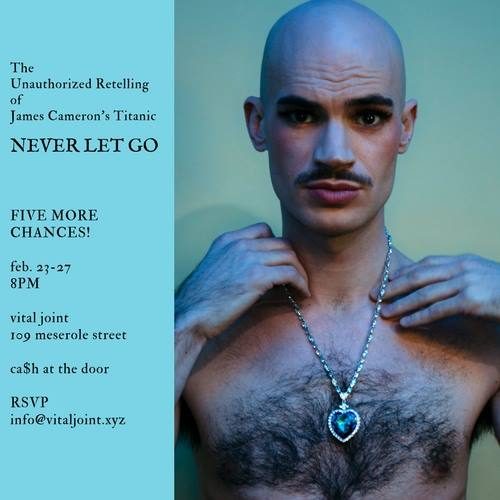 Your heart won’t go on if you never check out this one man show that retells the entire epic and tragic film Titanic. “After a wild ride in June, and an encore in December, Never Let Go is embarking on a third, extended voyage. Even if you haven’t seen the film—this production will rock your boat.” 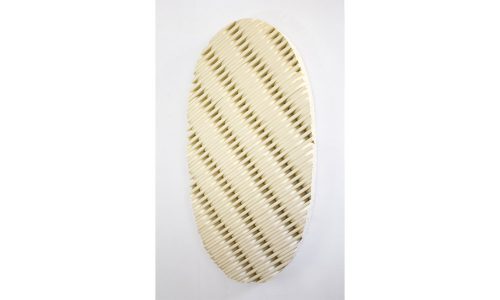 “The point of departure for Martinez’s latest sculptures began with her long-term fascination with the electronically-based, post-punk new wave music of the 1980’s. Martinez is fixated on the videos that accompanied the music of that era, particularly the Buggles’ “Video Killed the Radio Star”, and the contrasting effects of the complex and serious abstraction of the music with the rather primitive, and at times nearly comical videos. In many ways, new wave depicted the juxtaposition of high and low culture, the decorative versus the functional, and the line between taste and class. Referencing her early days as a fledgling DJ, the works on view provide Martinez an opportunity to explore the concept of the remix, and the idea of technology altering the ‘original’, of varied influences associatively coming together to create a new original identity. In a world of previously emitted signals, what is the original and what is the remix?”

Microscope Gallery is bringing legendary transgressive artist Nick Zedd back to the gallery (they hosted his retrospective in 2010 before he left NYC for Mexico City) to screen 17 of his newest video works.

If you’re not familiar with Zedd’s work, he directed the super low budget films They Eat Scum and Geek Maggot Bingo, and he’s collaborated with the likes of Lydia Lunch, among other shock-provoking artists. In the early 1990s, Zedd toured with Lisa Crystal Carver’s Suckdog Circus and later performed with experimental noise band Zyklon Beatles. According to his Wikipedia page, “In 2013, Zedd published “The Extremist Manifesto,” an essay denouncing contemporary art and the class structure that promotes it while announcing the emergence of the “extremism” covert art movement in Mexico City subverting the edicts of established art institutions and curatorial ideologues. This manifesto, first released online, then in a self-published Hatred of Capitalism magazine issued in Mexico City (in English and Spanish), sent shock waves through the art world and was reprinted a year later by the Chopo Museum, along with two more issues as part of the Fanzinoteka exhibition.” 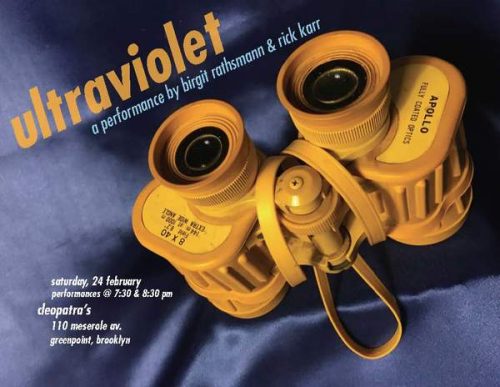 “Ultraviolet is a multimedia performance by Birgit Rathsmann and Rick Karr that attempts to come to an understanding of what’s happening today in the United States using principles of evolutionary biology — with help from some volcanic islands, a Victorian British naturalist who lived on one of them, and some particularly florid species of birds he studied there. Along the way, Ultraviolet touches on gender roles, sexual desire, the stimulant effects of mobile devices, the blurriness of borders, and the meaning of a door without a wall.”