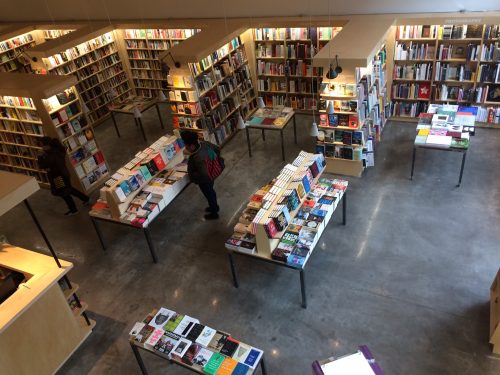 For the last four years, McNally Jackson, the beloved indie bookstore at 52 Prince Street, has been in the process of opening a branch in Williamsburg. Now, the wait is over. The Williamsburg outpost has opened its doors at 76 North 4th Street, joining mainstays like Spoonbill and Sugartown and Book Thug Nation to round out a literary trifecta in Williamsburg .

McNally Jackson has an exceptional selection, and fans of the Prince Street location will recognize a comparably rich array of titles grouped by genre, and spread over two floors, as well as the impressive collection of literary magazines, indie periodicals and art journals.

The selection runs upwards of 35,000 titles, so you can expect some pretty fantastic food for thought, even if the fantastic food itself is staying at the Manhattan branch: the Prince Street location boasts a wonderful cafe that’s absent here, reflecting the more industrial nature of the space. The North 4th street spot sits in the Lewis Steel Building, a converted factory space, and the store feels bright, clean and focused, but not cozy in the same way the Prince street location does.

Happily, a still-to-be-announced event schedule will be making it’s way to the Brooklyn branch. That means readings, book clubs, talks and panels.  The North 4th Street Location is open 10am-10pm Monday-Saturday, and 10am-9pm on Sundays.