Review: Frankie Rose’s Album Release Was an 80s Daydream at Baby’s All Right

Frankie Rose, an original member of Crystal Stilts, Dum Dum Girls and Vivian Girls, introduced her fourth album Cage Tropical at Baby’s All Right (146 Broadway) before she heads out on her US and European tour. Frankie’s performance was a shimmery 80s daydream: ultra-confident and unapologetic, yet she exuded a mellow energy. Her vocals were glimmery and ethereal. And, psychedelic projections that changed for each song—from an atomic bomb to flashing disco palm trees—set a powerful backdrop to her intoxicating voice. Songs like “Love in Rockets” and “Cage Tropical” incorporated the perfect blend of 80s synth beats, California-surfer guitar, and unstoppable drumming. Her lyrics, “A wheel, a wheel, a wheel of wasting my life here,” hits home the idea of a negative, vicious cycle.

Frankie initially wrote this album without a specific concept in mind, but Cage Tropical‘s meaning unfolded as she created it. “I think I’ve grown to trust myself more and I don’t like to emulate anything else,” Frankie Rose said when I chatted with her before the show. 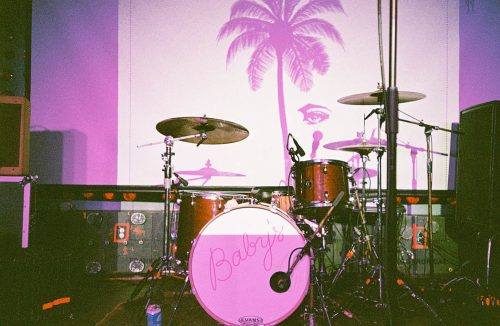 The song “Dyson Sphere” was the evening’s highlight, echoing 80s dream pop bands like Cocteau Twins and The Cure. Frankie skillfully wove together an upbeat-sounding song while singing about a challenging time from her past: “Days are long when you live without the sun / Days are long and we knew the day would come.” Frankie remarked, “It’s a remnant of what was going on at a time. I was struggling and going through a hard time in LA.”

New York-based electronic art rock duo Tempers also deserve a mention. As Frankie Rose’s opener, they set the stage for her performance with their own dark, emotional sound. During “Strange Harvest,” Jasmine Golestaneh knelt on the ground singing: “Let them find you when you know you’re lost / you’ve been kneeling in a false dawn,” which created an evocative and haunting atmosphere leading into Frankie Rose’s powerful set.

Laura is a freelance stylist and content creator.
View all posts by Laura Dresser →