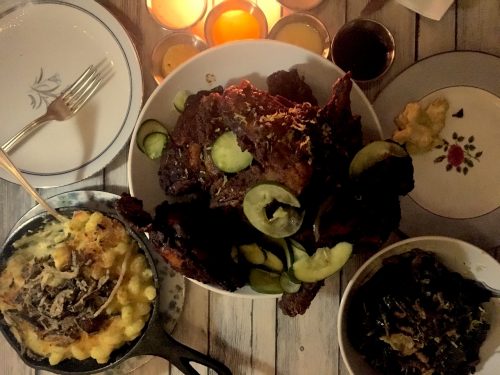 “NEW FRIED CHICKEN JOINT ON MY BLOCK” read the text message accompanying a selfie of my friend in front of a pretty-in-pink menu posted in the window of 14 Bedford Avenue. Since that mid-December text, the opening of the new Five Leaves neighbor, Pretty Southern, was on my radar. A few weeks ago, also accompanied by my informant and two of our friends whose culinary opinions we highly value, I dug into that eagerly anticipated “healthful take on fried chicken and celebrated southern comfort fare.”

We gathered around a four-top just in front of the bar, near the windows facing Bedford, one of the few tables in the small, chic, Greenpoint newcomer intended mostly for take-out and delivery. (There is also an interior counter looking into the kitchen that is called the Chicken Coup and would be ideal for a solo or duet meal. Plus a heated and enclosed back garden space is currently being finalized.) We soon realized that the other “large” party dining that night was celebrating an infant’s birthday, which further affirmed for us the sense of warm, southern hospitality with which we were greeted initially and treated throughout our meal. (Yeah, it also gave us the impression that that was one cool kid.)

Our quartet included a resident southerner, also originally hailing from Charlotte, NC like Pretty Southern’s chef, Sam Talbot, best known for his time in the kitchens of Soho’s Imperial No. 9 and Montauk’s The Surf Lodge as well as his appearances on Bravo’s Top Chef. Understandably, given Pretty Southern’s modern American approach to southern cuisine, our Tar Heel friend found the meal nontraditional in some regards, noting the texture of the fried chicken as one particular item she found deviating from the norm. For her, the success of the fried chicken lay in its flavor profile. She also thoroughly enjoyed the chicken sandwich (crispy chicken thigh, ranch, lettuce, cucumber, biscuit, $11) on a return visit later that week for lunch. Our friend who joined her for that midday Fry Mix fix (8, 12 or 16-piece with biscuits, pickles, and sauces, $37-$71) really enjoyed the fried chicken and appreciated that it wasn’t a total diet disaster.

Pretty Southern does indeed put a healthful emphasis on whole, high-quality and organic ingredients (e.g. chickpea flour, coconut oil, coconut milk). And if diners don’t want to go the fried route, there is also rotisserie chicken on the menu (half bird $14, whole bird $32). 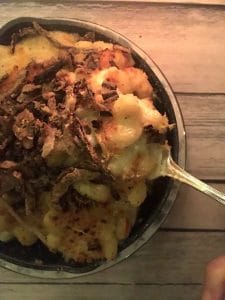 Pretty Southern pays close attention to food allergies and is happy to accommodate gluten-free, dairy-free and vegan dietary restrictions. Cue the coconut milk grits, a hit among the three Yankees at the table for its intrigue in the opinion of two of my table-mates, and, in my case, for the simple fact that coconut milk is my preferred substitute for cow’s milk (amen, Van Leeuwen) and it really works here! The fried chicken is available gluten free if requested, as is the Mac + Cheese ($8, +$2 up-charge GF option). The plain biscuits are also available gluten free, and the flavored varieties (more on that) are already gluten free. Some are dairy free too (e.g. “seasonal preserves” and “coconut cinnamon honey”). The biscuits ($4,+ up-charge depending on flavor) were another area where the twist on southern tradition was evident. The texture was denser than that of a customary flaky, dry biscuit. And while Talbot gives a nod to classic southern flavors by featuring pimento cheese and bourbon butter in the medley of biscuits, the flavor offering itself embellishes the tradition.

Let it be known that our table’s trio of thirty-something boss ladies (including yours truly) delighted in ordering a glorified Kid’s Menu item, endearingly referring to the chicken strips on the menu as “adult chicken fingers.” That was one occasion when breaking with custom was A-OK with everyone. Somehow we managed to save room for dessert: my friends resoundingly praised the banana graham cracker pudding (toasted coconut and sesame); I single-handedly devoured the biscuit bread pudding (dark chocolate chips and bourbon cream).

In keeping with Talbot’s focus on philanthropy, the restaurant will contribute to the local community through its “clean and green” philosophy. All containers and food used at Pretty Southern are compostable and recyclable, and the staff participates in trash cleanup in and around the neighborhood weekly. Right on, and thank you, Pretty Southern!

Perhaps the name says it all: this spot is pretty Southern, but, buyer beware,  shouldn’t be sought out as an authentic representation. Rather as a variation on a theme. And one that will be especially appreciated by those who are looking for attention to what goes into the cuisine and some flexibility within those ingredients. I’m curious to go back once Pretty Southern has a few more weeks of refinement under its belt, and to enjoy the back “outdoor” space. Welcome to the neighborhood!