Rally at City Hall to Save Bushwick Inlet Park Tomorrow (Mon, 8/8, 11AM) 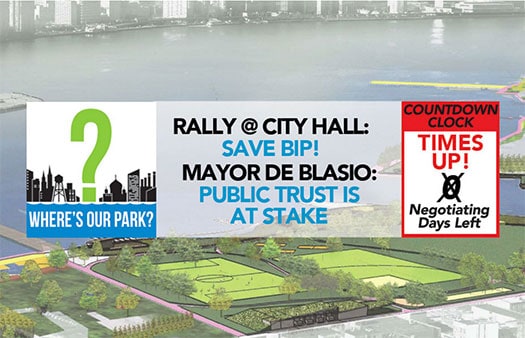 The city is just 11 acres away from fulfilling its promise to deliver all 27 acres of Bushwick Inlet Park and made a $100 million offer to purchase the final piece needed on June 9th. Two days later, owner Norm Brodsky officially refused the offer and it expires tomorrow (Monday 8/8).

In a call to action to the community to rally at City Hall tomorrow (Mon, 8/8, 11AM), Friends of Bushwick Inlet Park writes:

We’re Close! But North Brooklyn Needs YOU To Make a COMPLETE Bushwick Inlet Park a Reality!

We’ve been fighting for over a decade to get this park built. And after Mayor de Blasio’s historic $100 million offer to buy the last piece of land, we are inches from the goal line.

But Norm Brodsky, the owner of the CitiStorage property*, intends to let the City’s offer expire on Monday, August 8th, and is threatening to sell the property out from under the City to a private developer.

We CANNOT let private greed triumph over the public good!

If Mayor de Blasio does not act NOW to exercise the City’s right to eminent domain, our RIGHT to a completed park could be lost!

Losing this park won’t just be a disservice to Williamsburg and Greenpoint’s residents, families, and kids – it will show how empty the City’s promises are so long as they get the real estate deals and rezonings they’re after.

That’s why we need YOU to compel the Mayor to act NOW to secure this park for all of our kids and families – and for future generations!