In honor of Passover, which begins this Friday at sundown, it felt only fitting to take a closer look at Frankel’s, the newly opened delicatessen and appetizing shop at 631 Manhattan Ave.

It’s not to say the iconic delis of yesteryears can’t cut it anymore, but there’s clearly been a revival written about aplenty everywhere from The New York Times to Bon Appétit Magazine. But what Frankel’s offers is more than just a good brisket — it’s a modern, younger take on old school dining.

As the saying goes, where there’s smoke, there may be smoked salmon. And there’s plenty of it at Frankel’s. The menu brings you dishes straight from the old country — hand-rolled bagels, fluffy matzah balls, cooked daily hot pastrami and corned beef sandwiches, slow-cooked brisket and artery-clogging chopped liver.

The food tastes as it should: deliciously salty yet fresh — a delicate balance of simplicity and flavor and portions that are generous but not overboard. They don’t seem to be reinventing traditional fare, but rather honoring the classics from their grandma’s kitchen to your belly.

Paired with these traditions, Frankel’s is taking a page from the booming fast casual industry, with a smaller menu, targeted tastes and an emphasis on food quality. They are focusing on the simplicity and specialty of their offering, but in a venue that’s anything but old school. 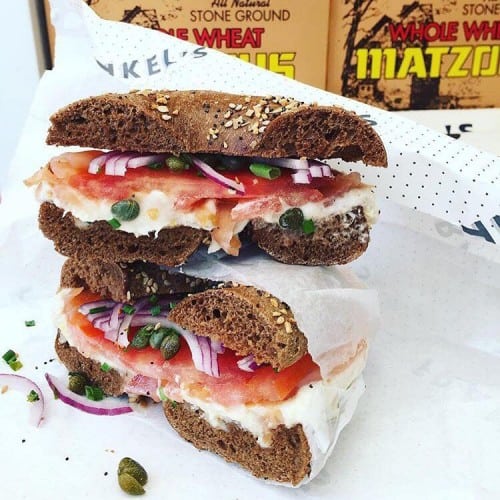 The white subway tiles and walls provide a clean, simple and inviting place to gather (if you can handle the lines that have been forming of late and the limited 18 seats available). They’ve been selling out of food around 3pm everyday, but hope to open for dinner and beyond in the coming months. The music is low but vibrant – likely due to the musical background of co-founder Alex Frankel, a member of the synthpop duo Holy Ghost!. It’s been said that other music industry folk are investors and patrons as well (e.g., rapper Despot and Run the Jewels rapper-producer El-P).

Alex is joined in the venture with his brother Zach, a former chef at Jack’s Wife Freda. You can find them working the counter and greeting passersby outside. You can also get a glimpse into their heritage and history with family portraits taken from bar mitzvahs and holidays adorning the wall. The siblings also recruited Food Network alum Ashley Berman, who serves as executive chef, and added her grandma’s recipes to the mix as well, with slight modifications and alterations.

Some of the tricks of the trade are the fresh, local ingredients (fish from Acme Smoked Fish and pastrami and corned beef from a “secret smokehouse” nearby that’s then finished onsite). They have been embraced by the local community, sourcing materials for construction from local vendors and working collaboratively with other restaurants. 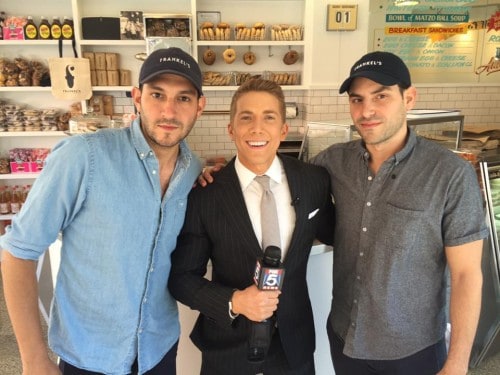 It’s clear the idea of community, family and traditions reigns supreme at Frankel’s — where even the receipt includes some Jewish gilt with a reminder to “call your mother!” So if you are looking for that last minute fixing for the family Passover Seder or a casual, cool brunch any day of the week (except Monday), stop by Frankel’s and be part of the movement that’s making old school food modern.