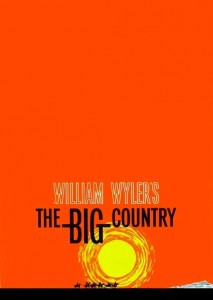 If restaurants can recommend wine pairings for food, why can’t we recommend a movie interlude for your CMJ Music Marathon club hopping tonight?

Light Industry, an alternative art space in North Greenpoint (155 Freeman St.), is exhibiting The Big Country, the classic but rarely seen Western movie by director William Wyler. It starts at 7:30 pm and ends around 10:15 pm, providing the perfect bridge between the CMJ afternoon shows in the city, and the shows at nearby LIC Bar and The Good Room later tonight.

It is not just any film that can complement the rush of discovering new favorite bands in the jumble of a music festival. The Big Country sets out diligently and mercilessly the casual violence, nihilistic vision, and wide vistas that open the mind to angry, cathartic music.

In The Big Country (1958), a seaman from the East Coast, played by Gregory Peck, travels west to meet his fiance’s ranch family, who are deep in a feud with their neighbors.

About the feud, Peck is all like, “your macho insecurity posturing is so 1940’s.” But it’s Gregory Peck, so somehow this stance comes across as noble and brave, instead of snarky.

Next thing you know he’s fighting a battle to the death with a gimlet-eyed foreman, played by Charlton Heston, just to show the pointlessness of war.

If that all sounds too preachy and avant-garde, don’t worry, the film is a real red-blooded Western, with lots of pistol play, wide shots of deep canyons hosting scenes of death, and a full cast of anachronistic characters.

If you can’t make it to the show but you need a way to come down from your CMJ show adrenaline high at 2am, the movie is available on streaming from iTunes, Amazon, and Google Play.

It would be a shame to miss it on the big screen, though, so catch it at Light Industry if you can.