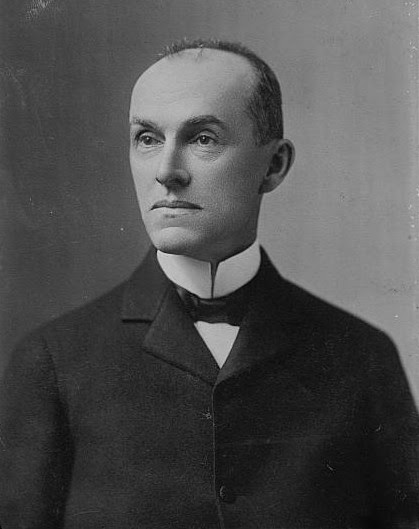 I have been researching McCarren for a book I am writing about Williamsburg . He was a fascinating, amazingly corrupt figure. In his day he was not just a powerful local boss, but was also powerful on the national level. Born in 1849 in Massachusetts, he grew up locally. Too poor to afford higher education, McCarren started life in the local sugar mills, but was ambitious. Politics in the eighteen seventies was almost the only way a humble man could acquire wealth and power.

McCarren came of age when Brooklyn was run by the massively corrupt political machine of boss McLaughlin who ran Brooklyn for almost forty years while his ring stole tens of millions. Recognizing McCarren’s political skills, McLaughlin tapped him to serve in Albany and McCarren quickly proved to be a talented legislator. Although McCarren claimed to represent the workers, he quickly turned his back on them and sold out to big business. During the 1880’s monopolies like the sugar producers and oil were making huge fortunes locally and they paid McCarren to protect their interests, which he did brilliantly. His income at the turn of the century from influence pedaling was estimated at $2,000,000 annually!

Corporations paid well, but the senator spent it as fast as he made it. He became one of the most legendary gamblers in New York history. When state senators earned three dollars a day he lost a hundred thousand a year at the racetrack in Saratoga and $75,000 in one race alone! McCarren also took huge sums from racetracks, casinos, and the liquor industry to protect their interest.

Despite being corrupt, McCarren was one of the most effective legislators Albany has ever seen. Even though his party was often in the minority, he worked with Republicans to get an amazing amount of legislation enacted. His two most enduring achievements were getting the money to buy land for McCarren Park and funding the construction of the Williamsburg Bridge.

In 1903 McCarren purged McLaughlin and ruled Brooklyn as boss until his death in 1909. Other politicians tried to challenge McCarren and destroy him politically, but like a Houdini he always emerged from seemingly inescapable situations victorious. He died at age sixty at the peak of his power.

Is he someone to be proud of? No. Should the city forego money to keep the name of a corrupt dead politician on a pool? Maybe not?

Only two mornings left of lap swimming…we will miss this daily summer ritual Public swimming continues until Labor Day weekend but word in the showers this morning was that this might be continued through September if enough people phone the NYC Parks and Rec Aquatic Dept in support…anyone know if this is true?? // Post by food editor @rosielikescolour