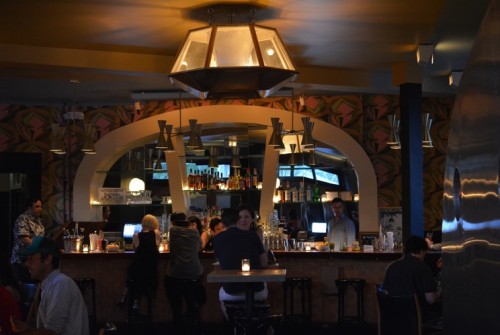 Black Flamingo may appear to be all about the vibe, with its splashy seventies-in-Florida décor and stylish downstairs dance club that feels like a Norwegian sauna accidentally fell into a Dan Flavin installation. The space was designed by Hecho Inc., who worked on The Box, Stanton Social, Beauty & Essex, Speedy Romeo, Baby’s All Right, and these dumpster pools.

But the latest from David Shapiro and Etan Fraiman of Battery Harris (another destination restaurant where you can while away your evening hours and dollars in a beautiful tropical environment) is all about the food and the drinks, so far. The hordes of dance mobs have yet to descend.

Williamsburg seems to have not caught on yet to Black Flamingo, which, like so many restaurants, still bears the sign of a former restaurant and seems to have no intention of changing it. The crowds will surely come, as will the wait for a table.

But for now, we easily slid into comfortable plush banquettes two minutes after arriving and began sampling the Latin-infused vegetarian fare (not all items are vegan, though many can be made vegan) created by recipe developer and food stylist Andrea Lubrano and produced by Executive Chef Soozee Nguyen, formerly of Champs.

First we ordered the Beeez, a sweet and pleasing first drink to begin the evening, featuring yuzu honey, gin and lemon juice. The Fez, with five-spice brandy, pomegranate molasses and pineapple, was spicy, tropical and middle eastern at the same time. The menu featured cocktails with names that made me wonder if the mixologist was an old-school hip-hop fan, including “Passing Me By” (Pharcyde) and “Me Myself and I” (De La Soul). 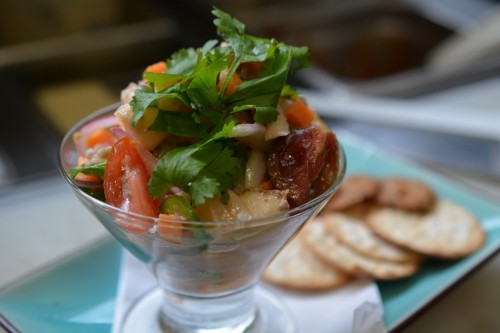 First came a veggie take on ceviche, with oyster mushroom, sweet potato and red onion, spiced with habanero and jalapeno, topped with cilantro, and served with flavorful multigrain gluten-free crackers. 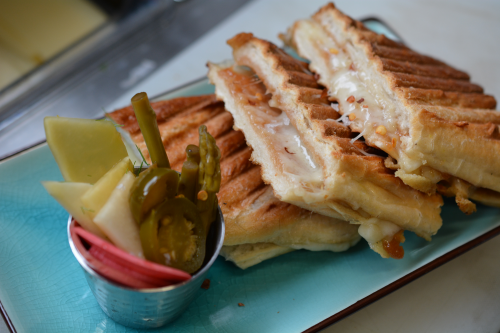 The banh mi featured a savory walnut-lentil pate and got an added punch when we asked to #putaneggonit (as you can with other dishes as well). Tender, tasty jackfruit crab cakes shone when combined with a healthy dab of spicy romescu sauce. 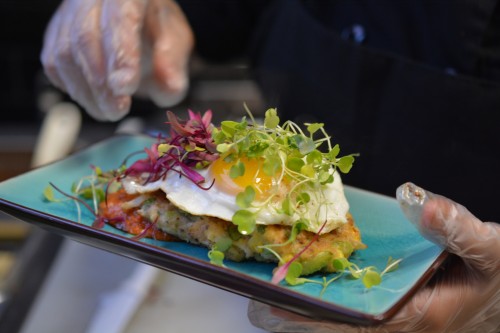 A fun vegetarian charcuterie board gave us the opportunity to pick from peppadews, shishito peppers, homemade pickles, olives, beets and our favorite, shallot jam.

A Spanish tortilla proclaimed itself a small dish, but two well-portioned slices were shared easily amongst several of us. Filled with ramps and potato and topped with a green West Indian shado beni sauce (a West Indian leaf similar to cilantro), this tortilla was more New York than Spanish — and representative of the kind of cuisine that Brooklynites have become accustomed to tasting. 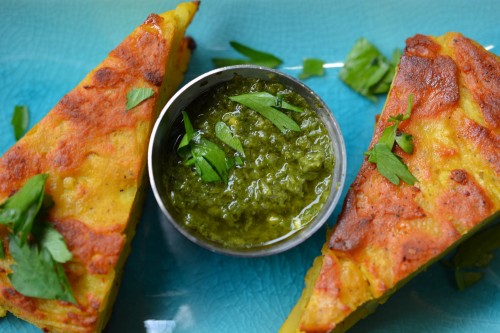 For dessert, there is only one choice, but it looms large. A vegan tiramisu cures the hankering for sweet drugs, with cacao, cashew, rum, fresh coconut and espresso.

The space and the food are perfect for groups, allowing you to sample almost everything if you come with four or five. And there’s more to look forward to. “In the future we will work together to develop transition menus that showcase the bounty of the four seasons,” Lubrano said. Add fall squash to a grilled cheese, or spiced pear to a dessert? Yes, please.

Teaming up with Eli Goldstein of popular soul danceoff party Soul Clap and Philipp Jung of decks duo M.A.N.D.Y., Black Flamingo has a roster of dj’s with serious intentions to bring electronic music fans to the yard. Lloydski of the always-fun Tiki Disco party will be there this Friday night. Now you know you’ll have enough sustenance to party through the night.