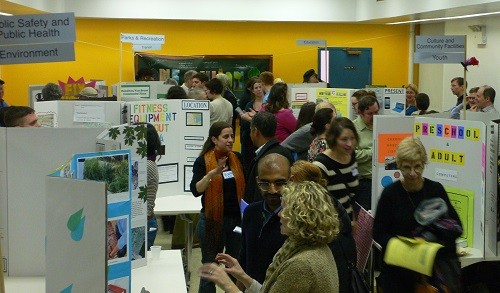 It’s time to spread the love again, and if Greenpoint wants to get a slice of that million dollar pie, we need to put our mouths where the money is and vote for our favorite projects.

So this Saturday, April 18th, while you’re picking up greens from the local Farmer’s Market at McCarren Park, swing over to the park’s Play Center between 12-5 pm, or Sunday at the Greenpoint YMCA, and get your science fair game on at the Participatory Budget Expo. All 13 projects will be on display to help make choosing the best ones easier. Insider tip: I was told there would be at least one foam board and an lava-flowing volcano to play with!

Well, the volcano might be stretching it, but out of the 13 projects on display, here are a few Greenpoint/Williamsburg specific highlights worth considering:

3 people have died and over 104 people have gotten hurt at this busy thoroughfare. This project has the potential to be a real lifesaver.

Lighting & Accessibility for all at Williams Plaza/Roebling Street

This project could also be a lifesaver for anyone walking home at night without a trusty flashlight or a switchblade. The underlit area has been plagued with crime for years and lights would go a long way at making people and the surrounding neighborhood feel safe.

Both schools are woefully underfunded when it come technology . P.S. 31 wants the cash to replace their dinosaur computers, while P.S. 110 is looking to install modems. Each school is on a separate ballot.

If you can’t make it to the expos this weekend, don’t fear. The chart below has the scoop on all the dates and times for alternative voting locations. 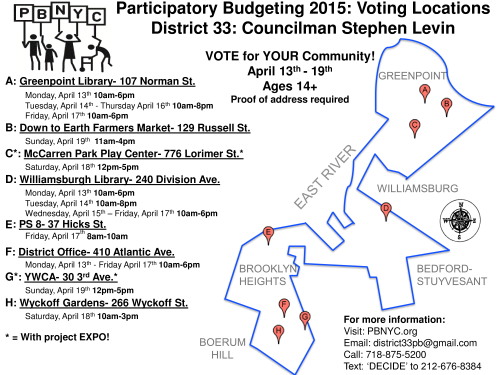 Got all that Greenpointers? So what are we waiting for? Let’s get out and spend some of dough!