A Dose of Greenpoint History – The USS Monitor

Last week, we hit the 152 year anniversary of Jan 30th, 1862, the year Greenpoint staked its claim on history as the site where the ironclad USS Monitor was built and launched, in the midst of the Civil War.

The vessel was constructed at Continental Iron Works and designed by the Swedish-born engineer and inventor, John Ericsson. The innovative design captured the attention of the world and became famous for battling the USS Merrimack of Virginia in the Battle of Hampton Roads, which lasted 4 hours and was the first stand-off between 2 armored warships. Neither ship could destroy the other, although many cannon shots were fired.

‘Twas like a very frustrating game of Battleship, but REAL.

In December of the same year it was launched, the USS Monitor was lost at sea during a storm off Cape Hatteras, an Eastern landmass of Bermuda known as the “Graveyard of the Atlantic.” YARR spooky. Sixteen men went down with the ship and 47 were rescued by lifeboats.

The shipwreck was found in 1973 and has been partially salvaged–the remaining pieces of the ship are on display at the Mariners’ Museum in Newport News, Virginia.

But odes to the lost battleship remain to this day. Recognize this statue? 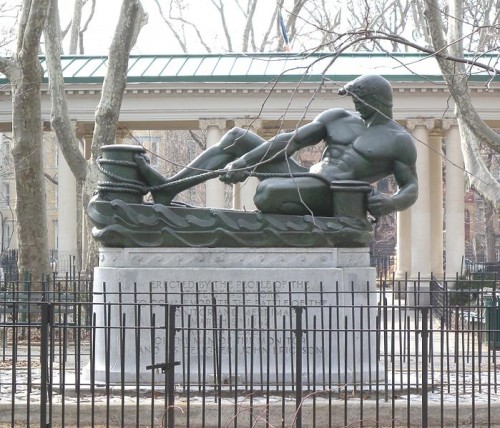 That’s the Greenpoint Monitor Monument right here in McGolrick park. It depicts a nude sailor (who looks like your average Hercules) and was erected in the 1938 in memory of Ericsson and the lost crew members.  And now you can probably guess what Monitor Street was named after.

That’s all for my little Greenpoint history lesson. I know I won’t look at that statue in the same way again.

Read more about the monument here.