Greenpointers, we’ve been getting some serious complaints about the B48 as of late. One resident, who frequents the stop on Nassau and Kingsland, has gone so far as to call and email the MTA multiple times to no avail (they replied to her with several canned responses that marked the case as “closed”).

Our tipster writes: For the past two months, service has been non-existent at worst, shoddy at best. As a major artery in the transportation system in Greenpoint, you’d think the MTA would make an attempt to keep this line running smoothly, yet every morning, many of us find ourselves stranded on Nassau between Kingsland and Monitor.

I have yet to see a single supervisor sitting at our stop in the morning, and I’ve purposely staggered my bus times (switching between waiting for the 8:39am, 8:54am and the 9:09am) just to see if anyone from the MTA shows up, or if one bus is better than the others at being on time. Alas, my efforts have been a miserable failure.  Today, I waited for the 9:09am (which never showed), only to board the 9:24am…at 9:31am.

Her recent inquiry to the MTA merited this response:

We regret the incident you reported. We have informed the Department of Buses Road-Operations Unit of your strong and continuing concerns regarding B48 bus service, and requested that they take all necessary measures to correct the problems you described.

As we mentioned, the case was then marked as “closed” and according to our tipster, the busses are still consistently late.

We weren’t sure if this was just one person’s perspective so we took to our official polling site to get some answers: facebook. The response was troubling, from “sometimes it doesn’t arrive” to “the schedule is absolutely unreliable.” 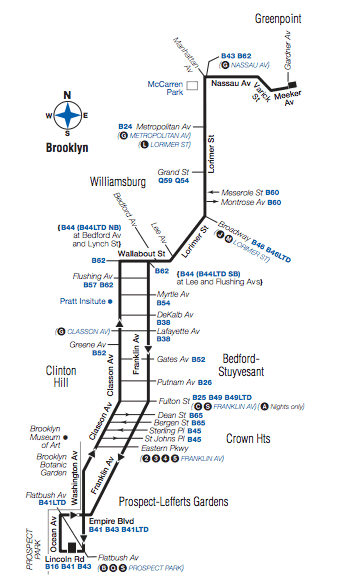 The B48 runs from Prospect-Leffers Garden, though Bed-Stuy, South Williamsburg, and down Lorimer Street to the Nassau G stop. The residents who live in the area by McGlorick park particularly depend on this line for their commute to the G or L trains, especially for the elderly or diabled who might have difficulty reaching the subway by foot.

So what are we Brooklyn residents to do when the busses just aren’t working? Do we call 311, only to be directed to 511, only to wait on hold for 15 minutes (to the sounds of sweet, Kenny G elevator jams) before being told we should have dialed an entirely different number? Or should we take to the streets, waving a flag of surrender to the MTA, hoping that they take pity on our tired, car-less selves?

Because of our extra special status as “press,” I contacted Kevin Ortiz, who manages media relations for the MTA, who gave me the inside scoop.

“The route is currently under review based on ridership and running time checks taken earlier this year,” Ortiz wrote via email, “There will likely be a proposed change to the route presented to the Transit Committee this January. Running times may need adjustment to improve reliability.”

He said that even given this pending review, the MTA hasn’t gotten any serious reports about the route delays from Brooklyn Road Operations or the Transport Workers Union. However, he did mention that the area is extremely congested with heavy truck traffic that could cause delays. The route is scheduled to run every 20 minutes, so any delay longer than that could be the result of a bus missing from the route due to an absent driver or a bus breakdown.

This news is better than no news, and I have to say, Ortiz responded to my inquiry within the hour, which is pretty impressive given the amount of complaints and questions he must receive as someone who represents the MTA. But, what should commuters do until January? The best advice I can give is to keep contacting MTA customer service. They can be reached by email via a form. The more complaints they receive, the more likely they’ll be to conduct further investigations into improving bus service (here’s to hoping).

In the meantime, we’ll be keeping an eye on developments. If you notice any changes or have any suggestions about action that the community can take, please comment below or post to our facebook or twitter.

Yours, always and forever,

The Greenpoint Bus Detective Unit, Special Division (I’m making a cardboard badge to wear proudly, preferably on a day-glo vest. I’m also joining the cast of Law and Order SVU because, frankly, they need more episodes about waiting for the bus)