Getting Schooled On Small Batch At Duke’s Liquor Box, Plus Tastings This Week! 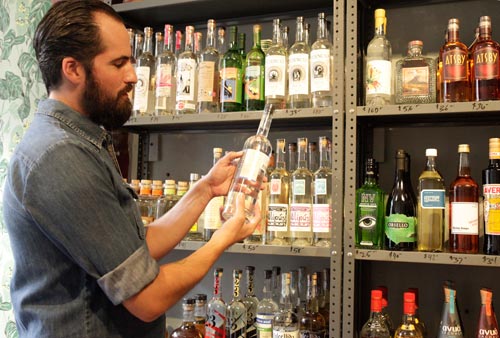 You may have noticed on Franklin St that Kill Devil Hill moved next door and in its place is Duke’s Liquor Box (170 Franklin St), a liquor store named after the son of Kill Devil Hill‘s Mary Brockman and Patrick Dacy. The kid is in my opinion “officially” the cutest kid in Greenpoint.

According to Patrick, the loan that jump started the business was from Duke’s Grandma, and it will be paid back to Duke in the form of a college fund or “travel the world fund.” An adorable letter from Grandma is framed up front and reads, “this is the weirdest college fund I’ve ever heard of.” It’s okay Grandma, this kid is set! 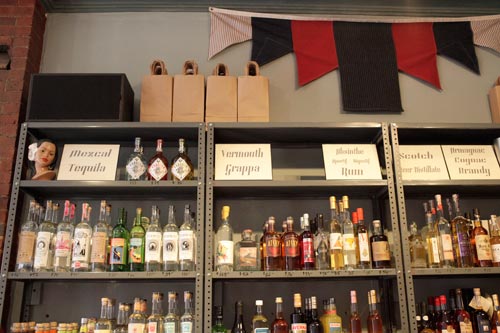 When the space next door became available the two jumped on it, and because of the State Liquor Authority’s strange rules which would be too confusing to get into, it made the most sense to open up in the former Kill Devil Hill space.

On a side note, check out the new Kill Devil Hill shop, which is totally revamped, making it much more shoppable in terms of the layout of the space. Lots of great new and old product, too. 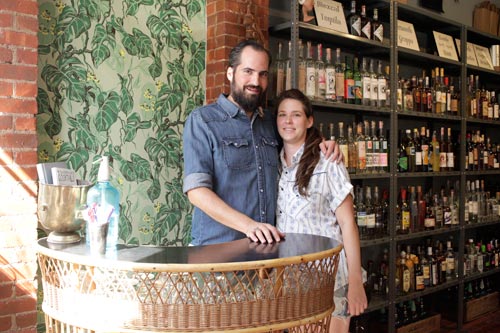 In order to get the license to sell liquor the landlord needed to approve the business plan so they came up with two other (actually genius) ideas as back-ups but the landlord immediately blessed the liquor store, saying he thought it would be successful and told them to forget about the other two ideas.

Why a liquor store? When they leased the space, Patrick asked himself, “What do I want to see on Franklin St? What will be successful?” Tired of “walking all the way to Manhattan Ave to the liquor store” he joke that it “dawned on [him] that Franklin St needed a liquor store.” 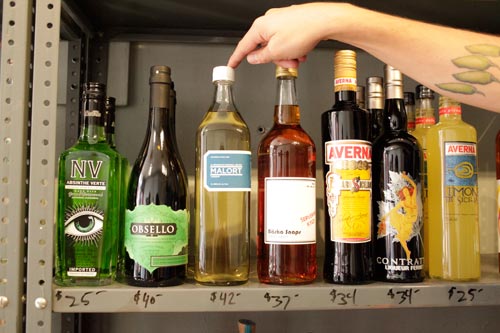 Duke’s Liquor Box is not just any liquor store. First of all it’s tiny and only sells liquor – no wine. The small wicker bar and the tropical vintage wallpaper up front are the only festive frills before reaching the down to business industrial shelves that are lined with a relatively small and carefully curated selection of “small batch hand crafted and obscure” liquor. And while the idea of a boutique liquor store might be intimidating at first, it’s actually pleasant to shop without an infinite number of options. And the prices weren’t scary.

“I want to continue to bring in stuff that is not so boutiquey but very unique,” Patrick said,” I don’t want to offend anyone with prices, but hand crafted stuff by nature is pricey. I found brands that are more mass produced that are not doing bad stuff, that I’d drink,” he said showing me a $20 liter of Vodka from Austria.

If you like tequila or mezcal, then this is the shop for you. Patrick, a tequila and mezcal aficionado, had a hard time finding good Mezcal in Greenpoint. The selection at Duke’s Liquor Box is extensive and by default Mezcal is organic according to Patrick. 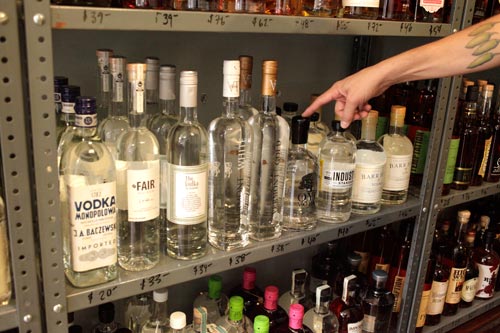 But the variety doesn’t end there. The vodka section was really intriguing, with Vodka’s made from quinoa, milk sugar, maple syrup, 100% wheat, beet sugar and raw honey.

And if you get off on obscure they have Malort, which is a wormwood spirit that is not very sweet and more citrusy and earthy than Absinthe, a few have distilled beers which made Dave from the Diamond get giddy, and a Vermouth that is for drinking by the glass. I’d drink that.

Going to Duke’s Liquor Box is definitely an educational experience and Patrick is super enthusiastic about explaining each and every bottle on the shelves. Customers stop in their tracks while walking by and when they come into the store they are, like I was, “blown away,” Patrick said and excited to find liquor that they’d never heard of before.

Duke’s Liquor Box also serves a niche clientele, bartenders in the area who have a hard time finding the small batch spirits they serve at work. And many of the liquor for sale was recommended by local bartenders.

“We want to take care of them,” Duke said, “We want to stock for them.”

In addition to hard to find spirits, Patrick will also have a fine selection of barware, like shakers and stirrers and will expand the bitters selection, which Patrick feels is “one of the most important ingredients” in cocktails.

Patrick also hopes to collaborate with local bars on cocktail workshops and events in the future.

So will little Duke have enough saved up by the time he gets to college? So far the shop has been very well received on Franklin St. But even more so Patrick feels that this is just the beginning of a new movement, similar to the local food and craft beer movement where the quality of ingredients and the process by which products are made is valued over a cheaper price.

“We should chose our liquor and spirits the same way we scrutinize our food nowadays. This is a food product. If I can chose an organic non-GMO vodka, I would. There’s transparency. You know want to know what is in it. When you look at a label of Jack Daniels – it doesn’t list the ingredients. This is the beginning stages craft spirits.” 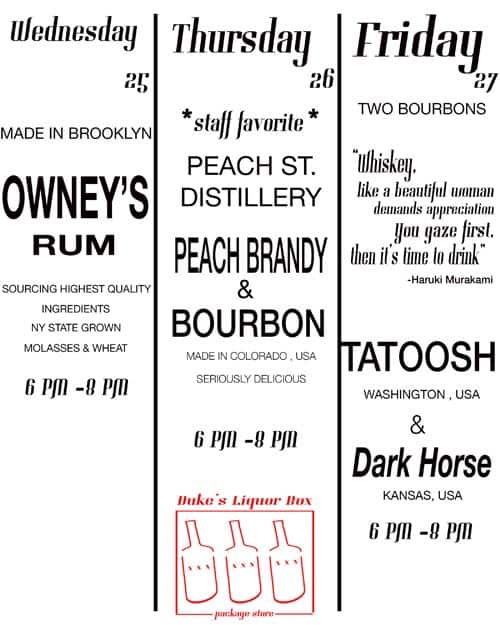