“We’re Loud and Out and Proud Of It!” Greenpoint’s Gay Owned Cafetico Bogotá Celebrates 7 Years!

I recently received an email from a young lesbian woman who is moving to NYC for school and wanted to know whether Greenpoint is a gay friendly neighborhood. Her timing was right since I began working on a series that asks the local LGBTQ community: Is Greenpoint gay friendly?

(Please join the conversation in the comments section.)

My first stop was Cafecito Bogotá (1015 Manhattan Ave), Greenpoint’s own Colombian restaurant that just celebrated its 7 year anniversary. A rainbow triangle was propped outside their storefront when I stopped in for brunch.

I met with Fernando Varela and Anthony Colón, business partners and
“partner partners” as Anthony put it – of over 14 years. Fernando added that “gay years” are like dog years.

It’s this fun and lighthearted attitude that make Cafecito Bogotá not just a gay friendly restaurant but an all around fun place to have an easy and delicious meal for anyone. There is nothing pretentious about this simple and culturally proud eatery which serves hearty authentic Colombian food in a laid back environment – gay or straight. 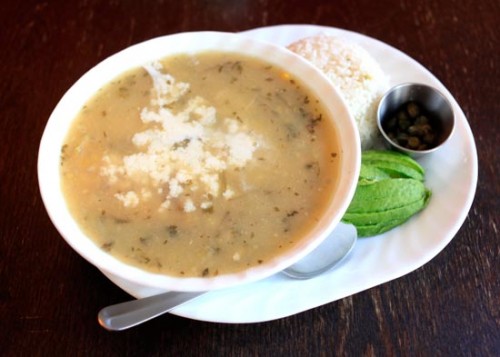 While I enjoyed my delicious Ajiaco Soup, a traditional Christmas soup made with three types of potatoes, I spotted two handsome young men enjoying brunch, too. At first I wondered, are they gay? After savoring my first hearty spoonful moist chicken and salty popping capers, I really didn’t care. The food here is the main event. As is the Aguardiente, the anise flavored sugar cane spirits that is the base of unique and fanciful cocktails.

That it’s gay friendly is a huge bonus in a community that doesn’t so outwardly boast gay owned businesses.

Cafecito Bogotá wasn’t initially advertised as a gay-friendly restaurant – “the focus was always Colombian first,” Anthony said, but after establishing itself it became important to be open about its orientation.

After a Williamsburg man was the victim of a brutal hate crime in 2011, Fernando, who helped raised funds for his medical bills, felt it was important to show his gay pride in Brooklyn and create a safe and comfortable place in his restaurant.

“You really have to be out there. It’s normal. We’re loud and out and proud of it,” Fernando said.

Fernando spoke about a recently married lesbian couple, now regulars, who came in to celebrate their wedding with their family. He was so pleased when they told him how they feel so at home at the restaurant. 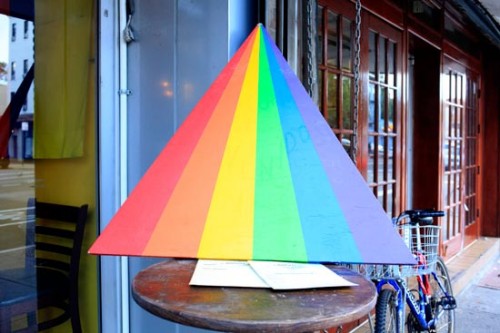 While the environment inside the restaurant is supportive, that isn’t always the case on the outside. The rainbow triangle has been trashed by locals a few times. Fernando and Anthony just laugh it off.

“Let them throw our triangle in the garbage! We’re used to it. We just dust it off and put it up again,” Fernando said, who later explained that he wasn’t always so “out” about his lifestyle.

Fernando and Anthony have two very different coming out stories. For Anthony, a native New Yorker, he explained that as part of “the first generation in this city that didn’t care – nobody had a guilt complex about it.” On the other hand, the “macho male oriented culture” that Fernando grew up in in Bogotá was not so open-minded.

“I was in the closet forever,” he said. He remembers his father confronting him in his late teens asking whether he was gay because he didn’t have a girlfriend. He answered no because he was “so scared.” He only came out when he was 23 years old, after moving to NY and meeting Anthony.

Fernando doesn’t hesitate now about being out – especially with his business. He explained that “NY is a platform for everything” and an inspiring place for gay businesses.

How does Greenpoint rank?

Still there are no gay bars here, the two complained – with Veronica People’s Club and Black Out bars both closed. Greenpoint definitely needs a gay bar. So where do these two hang out? Not in Manhattan – that is for sure.

“Manhattan is so played out!” Fernando said.

I was surprised to hear that the “biggest gay scene outside of Manhattan is in Sunnyside and Jackson Heights.” It’s where Fernando and Anthony met and it is the place of the second oldest gay pride parade which takes place the last Sunday of May. Go Queens!

Apparently Brooklyn Pride is a little, uh, “boring,” with a Saturday daytime parade in Park Slope. North Brooklyn needs a pride parade, too!

“Brooklyn never had a gay scene,” Fernando said, “I don’t feel the force of the gay community in Brooklyn.”

Enjoying a fantastic brunch with Fernando and Anthony, it was impossible to miss their frenetic enthusiasm and pride for the LGBTQ community. Meanwhile I sensed a deep longing for the Greenpoint and Brooklyn community to get on board already.

For Fernando Brooklyn is “the place to push new ideas. Manhattan is not as daring,” he said, “The food scene and art scene are better here in Brooklyn.”

Then why not the gay scene, too?

Are you LGBTQ in Greenpoint? Please share you experience with Greenpointers by leaving your comments below and/or emailing greenpointers (at) gmail.com to share your story.