Here’s a happy story to brighten your day: a stolen Greenpoint pup has been returned to his owners!

On August 30th Greenpoint couple Allie Caran and Zach Botham went out to buy birthday gifts for their French bulldog Oliver and came home to find their apartment on Manhattan Ave. burglarized and their beloved pooch missing.

“We were robbed of everything, and then when we realized Oliver was missing we completely freaked out,” Caran told the New York Post. The Post reported $18,000 worth of stolen items were taken from the apartment in addition to the couple’s most prized possession, Oliver.

Thanks to a gazillion concerned #HelpFindOliver tweets and a strong response by the NYPD, the pup has since been found, returned to his owners, and received his belated birthday treats. He was missing for a total of three days.

Police have not said how they found Oliver, but have charged the 22-year-old male suspect with burglary and grand larceny. Additionally, The Brooklyn Paper reports cops are looking for two more suspects in connection with the robbery. 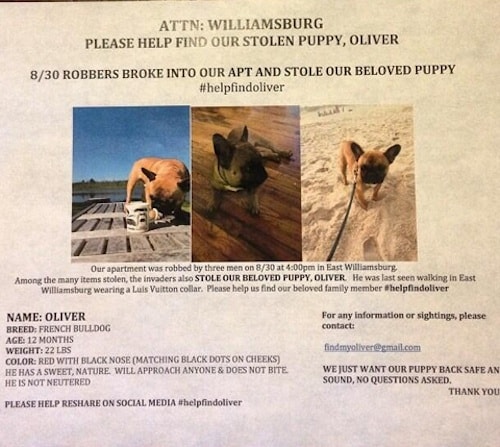 While Caran and Botham were elated to get their bulldog back unharmed and have praised the NYPD for responding so efficiently, they are now expressing concern that charges for dog-nappings are not severe enough. There are currently no laws specifically directed at the snatching of pets. Charges are based on the monetary value of the dog, much like other non-living, non-breathing items a burglar might steal.

As stated in The Brooklyn Paper, Greenpoint assemblyman Joe Lentol has been focused on changing this. “The current law does not allow for the severity of the loss,” Lentol said. “You have a companion and the law treats it like it is a piece of property.”

Lentol has been fighting for a bill that would create harsher penalties for pet thieves depending on the details of the crime, but hasn’t had much success. If passed, the law could keep these criminals behind bars for up to seven years. The assemblyman told The Brooklyn Paper he is hoping Oliver’s case will help further the bill this year. We certainly hope so, too!

Congrats to Allie and Zach for getting their dog back and a big thanks to all who helped, especially to the Brooklyn cops.