We chatted with him about his new album, and the best local venues to see live music (The Gutter, Silent Barn, Trans Pecos and RIP Greenpoint Heights). END_OF_DOCUMENT_TOKEN_TO_BE_REPLACED

It’s always a treat when Thee Oh Sees go on tour and play a few shows in Brooklyn. I always make it a point to go at least once because it’s nothing short of awesome. Thee Oh Sees psyched out the crowd at the Warsaw (261 Driggs Avenue) with dynamic jams with loud-meets-fast-riffs.
END_OF_DOCUMENT_TOKEN_TO_BE_REPLACED 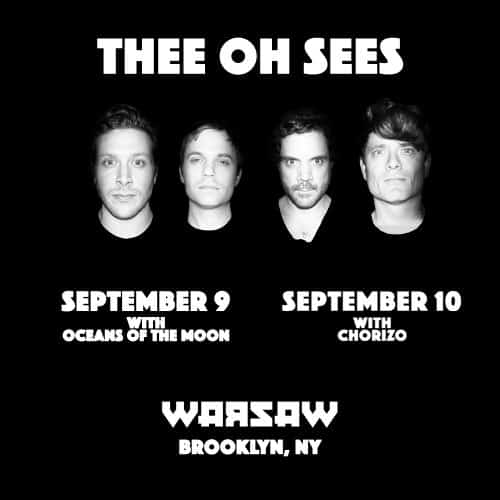 West coast band Oh Sees (recently/formerly/still pretty much known as Thee Oh Sees) are bringing their special blend of crunchy noisy dirty dancy garage rock to Warsaw (261 Driggs Ave) on Saturday September 9th and Sunday September 10th. ($24 tickets here) If you’ve never seen them live, you are in for a bonkers rock out to ultra-legit rock n’ roll. Their jams are sweaty, powerful, and will most likely knock your socks off. They’re currently touring to support their latest album, Orc, which was released at the end of August. It’s total psychedelic garage trash, and that’s a good thing.

Lucky for you, we’re giving away two pairs of tickets to the Warsaw shows, one pair for each night. Fill out this form by 5pm on September 8th for a chance to win. Winners will be selected at random.