Late Nite Cocktails and Dreams at The Regal

When conjuring images of legendary bartenders, you might be reminded of Tom Cruise doing the Hippy Hippy Shake in Cocktail. While their scene is more chic and the cocktails are more artfully crafted, the bartenders at The Regal in Williamsburg are having no less fun (and are arguably no less charming) than Tom Cruise’s character in that film.

We stopped by on a Sunday night a few weeks ago to meet and drink with Adam Lipiec, one of The Regal’s star bartenders. Adam’s a native of Poland and had bartended in Europe—in his home country, Ibiza, and London—before coming to New York. Aside from immediately noticing that Adam’s a genuinely friendly tall drink of water, you’ll spot him mixing drinks with incredible flair. He gracefully tosses a napkin and twirls it around to have it touch down delicately on the back of his hand as if it’s a butterfly landing on a flower petal. Drinks get shaken with a vigorous flourish, and shakers flip in the air and get thrown behind his back with the ease of a master juggler. Some of the cocktails require use of a blowtorch; if you’re in a fiery mood, get The Spitfire—sotol, pineapple, lime, jalapeño infused agave, for $10. END_OF_DOCUMENT_TOKEN_TO_BE_REPLACED 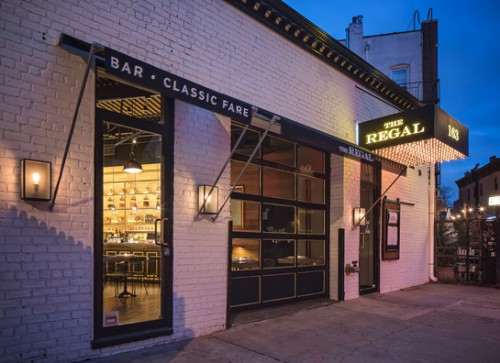 The Regal (163 Hope St) bills itself as a diner, but the white brick facade and gold-hued bar are the first signs to indicate otherwise. Though its atmosphere is relaxed, this lovely restaurant’s roots lie in fine dining.

Run by the folks from the always-entertaining Hotel Chantelle, this 70-seat late-night spot features comforting, soak-up-the-scotch fat bombs like spicy fried chicken sandwiches, chicken and waffles, mac and cheese, juicy lucy-style meatballs, Manischewitz short ribs, schnitzel and reuben rolls — all until 2:00 a.m. on Wednesdays and until 5:00 a.m. during “The New Yorker Weekend” — a.k.a. Thursdays through Saturdays. END_OF_DOCUMENT_TOKEN_TO_BE_REPLACED