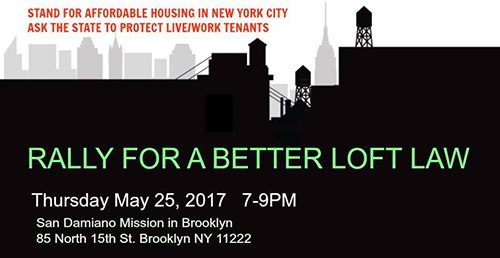 If you know any North Brooklyn artists in live/work spaces, you probably know someone who is affected by the Loft Law. Artists and creatives are being pushed out of many NYC neighborhoods, including our own Greenpoint and Williamsburg, and luckily you can support the local art community to help artists stay put. On Thursday evening, all are welcome to join tenants, artists, elected officials and housing advocates to show support for the 2017 Loft Law “Clean-Up” Bill. Speakers will include state and local elected officials, loft lawyers, artists and tenant advocates.

This puts the future of all 28 acres of open space in a precarious position and Friends of Bushwick Inlet Park is not taking it lying down. With impassioned chants of “Where’s our park?” and a series of speeches by community leaders and elected officials, they demanded that Mayor de Blasio does what it takes to deliver the waterfront park that was promised 11 years ago. END_OF_DOCUMENT_TOKEN_TO_BE_REPLACED Many Greenpointers complain endlessly about the poor service on the G Line. Do something about it! And enjoy free hot chocolate!

Join Rider’s Alliance at a rally for better G train service on Sunday, January 27th at 1pm on at Metropolitan And Union Ave.

Show your support for:
-Increased frequency of the G train.
-Free out-of-system transfers from the Broadway G stop to Hewes or Lorimer and the Fulton G stop to Atlantic/Barclays.
-Improved communication with riders, especially when there are service changes or disruptions.

Saturday (10/15) at 11am, supporters of the Occupy Movement rallied at Brooklyn’s Grand Army Plaza. More info.