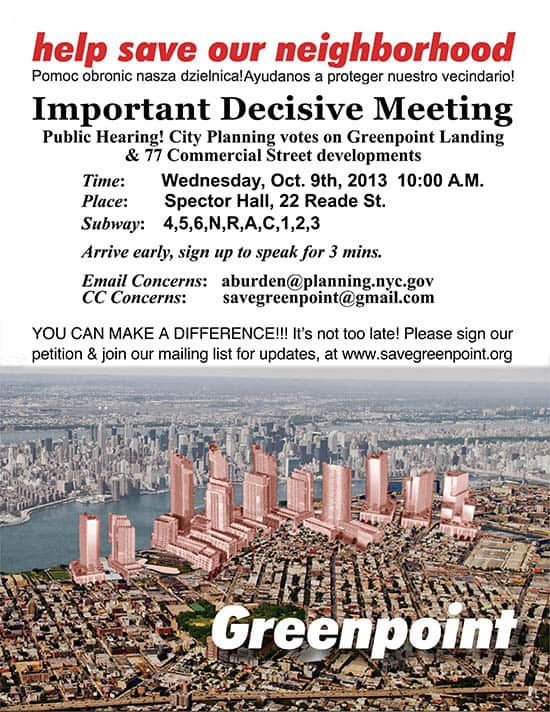 Tomorrow is the 2nd to last public hearing on Greenpoint Landing and 77 Commercial St. The City Planning Commission will cast a vote on the project.

Residents will be able to sign up to speak for 3 minutes each to voice opinions and concerns.

The developer has approval to build 300 market-rate apartments in a 15-story tower at 77 Commercial Street, but still needs approval for necessary zoning modifications in order to build an additional 500 units.

Greenpoint Landing would add 700 units as well as a new public school to the waterfront. The towers are currently above the height allowed by current zoning laws.

Controversy has arisen with regards to the affordable housing units in the building, de-funding of the park project, as well as additional population increases in the neighborhood, and the strain that increase will cause on public transit.

The local organization, Save Greenpoint, is fighting agains the towers, arguing that the development of Greenpoint Landing and 77 Commercial St will unearth harmful toxic chemicals into the local environment. They warn that residents will be exposed to harmful VOC’s from excavation for 3 years, impacting even indoor air quality.

They are still collecting signatures on this petition, to urge Governor Cuomo and the state to order a comprehensive Environmental Assessment of the redeveloped area before construction begins.

Note: From Kim Mason of Save Greenpoint: “If people cannot attend the meeting, they should write letters to Amanda Burden, the Director of City Planning. Her email is aburden [at] planning [dot] nyc [dot] gov.

Have you heard about the approved plan for the Greenpoint Landing development yet? Need another visual? Pretty crazy, right?

Like it or not, the Greenpoint Waterfront will soon be drastically transformed by a 22-acre, 10-tower development.  The plan includes 30- to 40-story buildings, comprising 5,500 apartments, retail space, and a new public school.  If your reaction is one of  shock, outrage, or overwhelming joy (because you love love LOVE condos more than life itself!), now is the time to weigh in on new changes proposed by the developers.