Some people may have heard of Greenpoint-based musician Andrew Shapiro as that guy who played modern classical piano at a McDonald’s in lower Manhattan every Sunday for nine years. Other people might vaguely recognize his name when hitting “like” on his song Mint Green on Pandora (it’s got several million plays). Still others might know him as the musician who recently collaborated with author and graphic novelist Neil Gaiman, who wrote the lyrics for his song Bash Street Worlds. This summer, Andrew released an ambient classical album and a synth pop album in the same month. Boring, he is not—his songwriting has taken him around the world—and some of those gigs he owes to being down-to-earth and confident enough to play at Mickey D’s. For a solo classical musician and an Oberlin Conservatory-trained pianist, one might assume he’s reserved and bookish; but in person Andrew is quite talkative and energetic with an innate curiosity about the diversity that is New York City. END_OF_DOCUMENT_TOKEN_TO_BE_REPLACED

McCarren Park Got A Piano via Sing For Hope 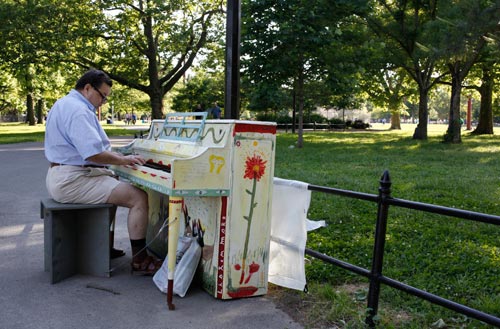 Sing For Hope, a public art installation, has scattered artist-designed pianos around NYC parks – including our own McCarren Park near the Lorimer and Driggs entrance. This project’s “art for all” message invite everyone and anyone to play.

Artist Scott Michael Ackerman who painted our piano, calls it “More” and explains that, it’s been “an underlying thought in [his] head for awhile. To just do more with your time alive..listen more, love more, play more.. And just enjoy what surrounds you. Because it doesn’t stop.”