Most people associate Greenpoint with the Polish community, but our area has a long and deep connection to Ireland. Let’s answer a few questions to prepare you fully to celebrate St. Patrick’s Day locally.

1) When, how and why did the Irish come to Greenpoint?

Greenpoint really began to be a community in the 1850s, just after the Irish famine devastated the country. Already in 1855 a third of the local residents were Irish. The Irish dominated the local waterfront. The McAllister family from Cushendall, Co. Antrim started a tugboat and lighter fleet and brought over many family members and neighbors from Northern Ireland and many Greenpoint Irish families have Cushendall roots. By the 1880s The Irish were a large and growing presence in the area.

2) What local places have Irish associations?

3) What local Irish pub are around to celebrate in?

Sadly we lost Shayz Lounge, which was run by two Dubliners. Connie O’s on Norman Avenue is the last real Irish-American Greenpoint bar. The Capri Lounge, once known as Murphy’s, resurrects its Irish past and throws a great party with many locally born Irish- Americans. The Palace bar was for many years run by an Irish-American family. Derry man Stevie Howlett at Lake Street gives an Irish aura to the Minnesota bar on Manhattan Avenue.

4) Did Any Irish Greenpointers affect Ireland?

Yes and how! Thomas Clarke who lived at 175 Russell St. returned to Ireland and took part in the Easter Rising. He formally declared the existence of the Irish Republic before he was captured and shot by the British. He and his wife are honored heroes in Ireland.

The Many Local Legacies of Pete McGuinness

There is a famous quote related to English architect Sir Christopher Wren: “If you seek his monument look around you.” The same could be said in Greenpoint of Peter J. McGuinness, the local ward boss who ran Greenpoint from 1923 to 1948. McGuinness profoundly altered Greenpoint and his many achievements are still visible everywhere.
How did you get to Greenpoint? If you arrived by subway it was McGuinness who secured the G train in 1933. The original route of the crosstown train did not go through Greenpoint, but McGuinness complained so loudly the route was changed. Did you drive over the bridge at Greenpoint Avenue? McGuinness also got that for our area in 1929 by being the firmest supporter of Mayor Jimmy Walker. END_OF_DOCUMENT_TOKEN_TO_BE_REPLACED

One big reason we study history is that it repeats itself. The anti-immigrant hysteria being stirred up today is nothing new, especially in Greenpoint. While researching a book on local political boss Peter J. McGuinness (1888-1948) I found an interesting piece of little-known local history.

In 1928 Jim McQuade was desperate to knock McGuinness out of his job as Greenpoint’s Alderman at City Hall. McQuade, looking to attract the votes of the sizeable Polish community and smear McGuinness, publicized the fact that in 1912 McGuinness had been part of a local anti-immigrant group called the “Native Borns.” McQuade claimed that McGuinness was “an active organizer” of the group and that the organization was similar to the Ku Klux Klan. McQuade funded the printing of a letter signed by three locals detailing the activities of the “Native Borns,” which included not patronizing foreign shops, not voting for foreign born candidates and discriminating against foreigners in all ways possible. There were hundreds of members in the area and “Native Borns” even attacked people who spoke foreign languages in the streets. END_OF_DOCUMENT_TOKEN_TO_BE_REPLACED

The Most Colorful Character in Greenpoint History: Pete McGuinness 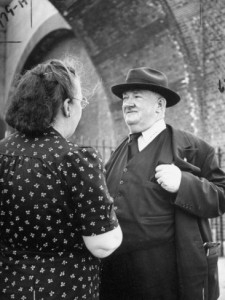 People who’ve read “Greenpoint’s Forgotten Past” have asked me who my favorite character from local history was. Without a second’s hesitation I say, Pete McGuinness, the King of Greenpoint.

So who was McGuinness and what made him so special? The short answer: he was the political “boss” of Greenpoint for thirty years until his death in 1948.

The longer answer is that he was  perhaps the most beloved person ever in Greenpoint and a legend. He wasn’t just from Greenpoint- he was Greenpoint, so synonymous with it, that it was hard to think of one without the other.

His rise to power was improbable- a grammar school drop-out dockworker who challenged the powerful corrupt local political machine and won. His thirty year hold on power was even more improbable still, but most incredible of all was that Pete turned out to be the amongst the rarest of politicians, being both honest and effective. END_OF_DOCUMENT_TOKEN_TO_BE_REPLACED