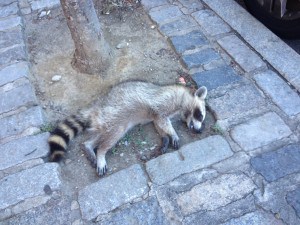 Last week my pleasant stroll down Franklin Street was interrupted by a horrible sight—a dead raccoon lay just in front of me on the sidewalk. The raccoon, who measured about a foot in length, was certainly not alone in Greenpoint. Area residents have reported a slew of the critters in every part of Greenpoint.

Raccoons are not just in Greenpoint. They are all over New York, but especially prevalent in Brooklyn (police chased a raccoon for hours last week in Ditmas Park). The NY Times on January 1st did a story on the creatures, reporting that there is a spike in residents paying for removal services. City law requires that captured raccoons be euthanized because they are potential rabies carriers, but they are so cute that few people have the heart to follow the law. Once released the animals often make it back to the area of their capture. END_OF_DOCUMENT_TOKEN_TO_BE_REPLACED