On Friday, the first small grants from the Greenpoint Community Evironmental Fund‘s (GCEF) $19.5 million were awarded to 18 environmental improvement projects in the neighborhood. The funds are ExxonMobil’s retribution for spilling 17-30 million gallons of crude oil into Newtown Creek. Thanks, Exxon!

This initial round of funding amounts to $395,000 (between $5,000 and $25,000 per project with matching funds), and encompasses high-quality, locally-led initiatives that will enhance open space, green the hood, and improve environmental education. END_OF_DOCUMENT_TOKEN_TO_BE_REPLACED 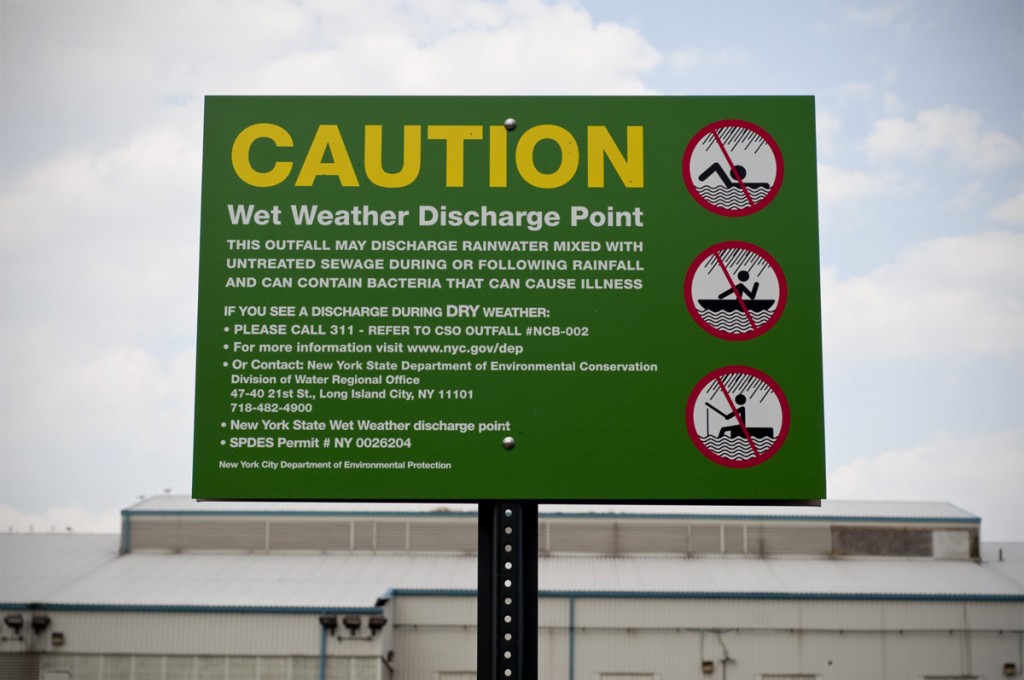 State of the Planet, a blog from the Earth Institute at Columbia University, is reporting that the city effort to clean up the polluted waterway is having an unintended effect.

According to a new study the clean up process is releasing sewage bacteria and other particles into the air above the site. The study is one of the first to establish a link between water pollution and air-quality, raising new questions about the health risks posed by dirty water.

Newtown Creek is already a source of combined sewage run-off, and could become even worse due to rising sea levels due from climate change. The New York Times ran an article highlighting the seriousness of the issue this Monday.

Don’t jump off the Pulaski Bridge just yet, Greenpointers. The news at Newtown Creek is not all bad. Here are just a few of the many upcoming community events looking to make the most of revitalizing our waterfront. END_OF_DOCUMENT_TOKEN_TO_BE_REPLACED

We did it! Newtown Creek Tour

In 1929 the NYTimes wrote that, “People do not travel for pleasure on Newtown Creek.” Those of us on the Working Harbor Committee’s “Hidden Harbor Tour” of Newtown Creek disagreed, as we traversed the 3.5 mile long estuary on a sunny Sunday.

The Working Harbor Committee (WHC), a not for profit, hosts boat tours all over the NYC area in what one of the day’s MCs called “the sixth borough” – the rivers and waterways surrounding the city. Sunday’s two-hour tour was hosted by members of the Newtown Creek Alliance, a non-profit community group advocating for development and cleanup along the Creek. New development requires cleanup, NCA claims, and would boost employment for Brooklyn and Queens residents along the Creek; as well as decrease the number of trucks trafficking goods on New York’s roadways. (One barge on the waterways, for example, could replace up to 70 trucks on the roadways.)

As the tour demonstrated, the Creek, which was once the busiest industrial waterway in the US, has a trove of secrets – wonderful and hideous.

Of the hideous, there is the “black mayonnaise” that rests 10 to 15 feet deep on the bottom of the Creek, which is the accumulation of every pollutant ever dumped there. (Since the Creek receives almost zero fresh water and is barely affected by the tides, the pollution literally does not move, even after centuries.) At some points in the Creek, the water has almost zero oxygen in it; at other points, mutant forms of life have been identified. What else can be expected of the place where Astral Oil began and Standard Oil burned down?

Of the wonderful: There is the building on the Queens side which one NCA member claimed was where Thomas Edison was building electric cars in 1915. Further wonderfulness: despite the vast environmental degradation, life has begun to come back to the Creek, largely because certain areas have been abandoned by industry. Birds, mussels and fish – if not abounding – are at least present; while some young people even managed to find a spot for an afternoon palaver.