After a lockout, public protest, and federally-mediated cooling off period, meat department workers at seven Key Food locations across Brooklyn, Queens, and Long Island have a new contract.

“We got what we was fighting for,” declared Bonnie Mingo, a meat wrapper at the Greenpoint Key Food on McGuinness Blvd.

The 38 members of the United Food and Commercial Workers’ Local 342 “overwhelmingly” ratified a new contract three weeks ago, said Kelly Eagan, director of Local 342, in an email.

This concludes a more than two-month-long fight in which Pick Quick Foods, Inc., the owner of seven Key Food supermarkets, barred meat department workers from work because of an ongoing contract dispute. END_OF_DOCUMENT_TOKEN_TO_BE_REPLACED 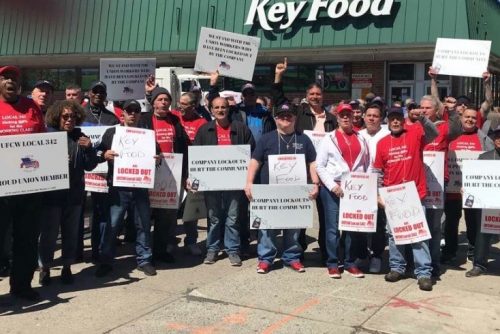 The lockout began April 6th in retaliation against union workers’ short-lived strike to protest what was deemed a “gutted” contract offer from the Pick Quick Foods owner, Benjamin J. Levine.

Members have begun to feel the pain of more than a weeks-long lockout. While her finances aren’t yet dire, Bronx resident Bonnie Alarcon cares for a family of four and her 76-old mother.  “It’s horrible I have to be here after so many years,” she lamented. END_OF_DOCUMENT_TOKEN_TO_BE_REPLACED

Key Food Meat Department Locked Out Due to Contract Dispute

On Monday, Bonnie Mingo, a meat wrapper at Key Food (224 McGuinness Blvd) buried her mother. On Saturday, she was on strike.

With little time to mourn, Mingo suddenly found herself locked out of a job she’s had for 20 years. “I’m still here supporting my coworkers when I could be out grieving. It’s hard,” she said in a late-afternoon interview, taking a break from picketing.

She, along with six coworkers, are battling Pick Quick Foods, Inc., a member of Key Food Co-op and owner of seven groceries in Brooklyn and Long Island. Approximately 35 other meat department workers in the company are also barred from returning to work in retaliation for a strike organized on Saturday, stated representatives from United Food and Commercial Workers’ Local 342.

.@KeyFood union workers are ON STRIKE! The Greenpoint Key Food owner has locked out employees for fighting for healthcare, retirement and fair wages.

Despite assertions that management refuses to negotiate, a public relations spokesperson from Pick Quick Foods disagrees. “We are waiting for Local 342 to return to the bargaining table,” they wrote in an emailed statement.

Seeds of this past weekend’s drama began last year when the owner of Pick Quick Foods, Benjamin J. Levine, and meat department workers started brokering a new contract after failing to reach an agreement years beforehand.

While there was the customary back-and-forth, Levine’s terms were unsatisfactory. He was trying to “gut” the contract, declared Kelly Eagan, director of Local 342, in a phone interview. She said he was proposing to cut health insurance, pensions, annuities, and access to fair wages.

Pick Quick Foods, though, disputes Eagan’s claim. “We have made offers to the union to continue competitive wages and benefits for our employees. However, the union continues to reject those proposals and is making demands that we believe will hurt our stores and customers and, by extension, our employees.”

If you’ve ever worked in a cafe, you’ve likely seen first-hand the large amount of food that gets dumped straight into the garbage at the end of the day. If you haven’t, then you’ve definitely walked by piles of trash bags on our neighborhood sidewalks, and maybe not realized that many of them contain still totally edible food. Around 20% of trash in NYC is actually, and unfortunately, food waste.

Now, a new app has launched in North Brooklyn to help connect everyday people to day’s end food at cafes, gourmet grocers and more—the app alerts you daily at the exact moment food is up for grabs at a much lower price. In our neighborhood, you can get discounted Polish home cooking from Polka Dot (726 Manhattan Ave), fancy donuts from Du’s (107 N 12th St), pastries and sandwiches from Woops! (both Williamsburg and Greenpoint locations), gourmet bread from Marlow & Daughters (95 Broadway), pizza from DiFara (at N 3rd St Market), and coming soon, even grocery items from the Key Food on McGuinness. There’s at least a dozen more shops and restaurants participating in the area, and lots more are signing on every day. END_OF_DOCUMENT_TOKEN_TO_BE_REPLACED

My mother is born-and-raised solid country stock from County Westmeath, Ireland. She remembers St. Patrick’s Day celebrations as chiefly religious, with the country going to mass with freshly-picked clovers pinned to buttonholes to honor their patron saint. Then there would be a shared family meal with special-occasion ingredients like beef or lamb, usually presented in roasts or stews.

Regardless of how you choose to celebrate St. Patrick’s Day (or whether you want to avoid all related shenanigans entirely), this traditional Irish dish is straight-forward, nourishing, rich, and perfect for spooning out among any group of friends and family (though with all due respect to my grandmother and her preferred method of just dumping everything in a big pot and leaving it, I’ve added and tweaked some steps to improve texture and flavor).

Recipe after the jump!

END_OF_DOCUMENT_TOKEN_TO_BE_REPLACED

In conversation with painter David Ellis

On the nippy day in January that I meet David Ellis outside of his Calyer & Diamond Street studio, men are unloading boxes into the ground level space of the three story warehouse. His studio is somewhere inside this massive complex with dusty, grey, winding hallways that faces Key Food. “I remember that this building looked derelict from the outside for most of the ’90s,” I tell David as he’s leading me into the belly of the beast. GHC Furniture and Futon Factory Outlet still have storefronts here, but most of the other space inside, David explains, now has been carved out into artist studios. “Photographers, sculptures, musicians,” he lists, as we walk past doorway after doorway on the third floor. Eventually, we reach a dead-end, where a door has been left ajar. David pushes it open. END_OF_DOCUMENT_TOKEN_TO_BE_REPLACED