But speaking of Japan, some other choice nuggets to be found this week includes making wasp shouchuu, an alcohol like Vodka  with fermented giant wasps.  The whole process takes three years and it’s maker says that its properties create “beautiful skin, recovery from fatigue, and the prevention of ‘lifestyle disease'”. Uh huh.  And have we mentioned Japan’s love for Ray Charles in animatronic form? END_OF_DOCUMENT_TOKEN_TO_BE_REPLACED

• Eater NY: Tom Mylan on the Hellish Opening of The Meat Hook

• Animal: Who’s got the best doughnuts in New York?

• Brooklyn Paper: Flea off the market! Home of W’burg bazaar sold for $18 million

A Drawing for One’s Internet Persona 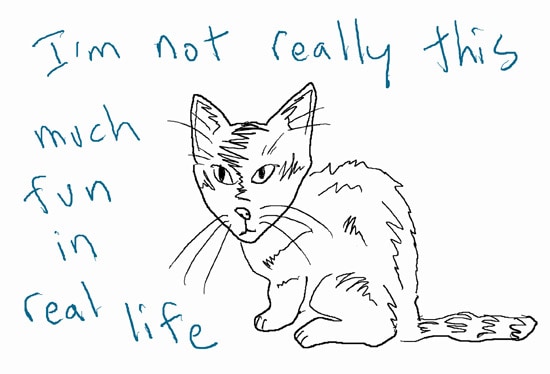 • Kickstarter Is Moving to Landmarked Factory in Greenpoint : Brownstoner

• Instead of Industrial Giants, Brooklyn Has Niche Factories : NYTimes

• Guide To Greenpoint: Top Reasons To Visit Brooklyn :  Guest of a Guest

• xoJane – Will My Student Loans Keep Me From Ever Finding Love?

• Free and cheap ways to get smarter online, one-off videos to 12-week intensives

Why is the internet on strike today?

We like a good fight and we don’t like anyone telling us what to do, especially online. Greenpointers is opposed internet censorship. We stand in solidarity against two bills SOPA & PIPA, along with many internet companies that Greenpointers uses daily: Google, Facebook, Dreamhost, Paypal, Tumblr, Twitter, WordPress and Wikipedia, to name a few. If you are wondering why many of the websites you use will be blacked out in strike today, click here.