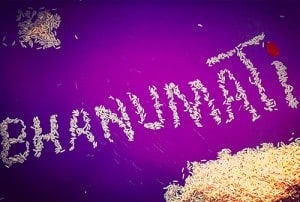 Greenpoint has some options for vegetarian food (Acai Berry, Jungle Cafe among others), but few options for Indian cuisine. Bhanumati is a new Gujarati Indian-influenced pop-up restaurant and culinary journey with a mission to highlight the breadth and creativity available in modern vegetarian cooking, hosted at foodie bookstore and cafe Archestratus (160 Huron Street). The menu will be inspired a state in India—Gujarat—that has been predominately vegetarian for centuries and was home to my ancestors. The first edition will happen on Sunday, August 21 at 1pm. END_OF_DOCUMENT_TOKEN_TO_BE_REPLACED

Foodis Operandi: Put An Egg On It 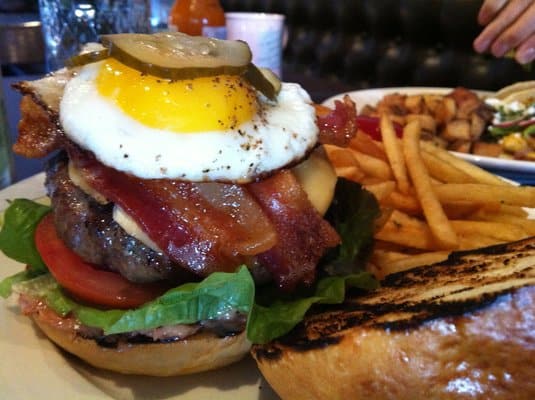 Before the advent of the Bacon Age, when it was decided that everything goes better with bacon, I always thought that most things can be improved with one simple fried egg added to almost any dish.  So, yeah, the egg came first. You really can take a not totally interesting dish to the next level by adding a sunny-side up, over easy or poached egg.

Here’s ten dishes made better with a fried egg:

1. Cheeseburger with Fried Egg. The image above was taken by me at bar & restaurant, Greenpoint Heights, of their “Brunch Burger” made with: smoked gouda, bacon, grass fed beef, pickles, tomato, onion, lettuce with cherry mayo and of course a messy egg that brings all the flavors together.

2.  Chili with Fried Egg, Cheese and Hot Sauce. Homemade chili or even chili in a can sometimes doesn’t feel like a full meal unless it has that extra kick, like a fried egg. Let some grated cheese melt on the chili and make it a little extra spicy with some Cholula or Tapatio.

3. Ramen with Fried Egg. This is the most common combination you’ll find online and it turns a one dollar snack into a two dollar meal. It would be crazy not to include it on this list, however, I hit my Ramen limit way back in my third year in undergraduate school.

END_OF_DOCUMENT_TOKEN_TO_BE_REPLACED

We are excited to announce our next class: Chutney Class with Drake from DP Chutney Collective. The class will take place on Wednesday March 14, 2012, 7pm at Good Yoga (73 Calyer St.) Learn to make and take home 2 fresh chutneys: coriander/mint & tamarind, and one cooked and unusual eggplant chutney, which will be canned. Class is $25 and includes all materials. Limit 12 people. RSVP to greenpointers (at) gmail.com. Our last class sold out quickly so sign-up ASAP.

Some visual credits: I shamelessly stole the poster design from Claire Typaldos, our Terrarium Class Instructor. And Jon Pywell made the awesome jar illustration!

I thought I’d dropped the ball. For a while Good Yoga was serving vegetarian dinners, but when I inquired, chef Moti was gone. Moti! Where are you?
Then I got an invitation to “Moti’s Last Supper” and I was so on it.
Going to Good Yoga is like going to a cozy (and more calm) extension of your own home and Flannery and Ray welcome you in like family. But like all supper clubs, the strangers sitting at the table aren’t family and at first there is some social fumbling. That is what red wine is for.

Moti, with his man bun on his head, was busy working the kitchen. I tried my best to get some answers. Moti, who are you? Where are you from? Why are you leaving us? But, Moti was very focused on his preparation and canceling out the background noise that was my voice.
It was presumptive for me to assume he was Indian, even though he looks Indian (in a yoga way.) Rather he is Kurdish, from Israel, but has an Indian spiritual grandmother, with whom he spent time with in India and where he learned some of his cooking. Moti is going back to India and everyone is sad to see him go. How long will he stay? However long he needs to, he explained.

I could have pushed and prodded (I am really good at that) but I left Moti to do his thing, for the last time, and remain a mystery to me. You can learn a lot about a person from what they do rather than what they say. In this case his actions resulted in delicious carefully prepared and wholesome food in my mouth.
Moti makes an art out of preparing vegetables, which is true vegetarian cooking at it’s finest. I don’t want fake meat and deep fried starch. I love vegetable and they don’t need to be masked with heavy sauces or cooked down until oblivion. Moti lets vegetables be vegetables, the best that they can be.

First Course: Cauliflower Couscous, Fennel Pesto, Olive Oil Drenched Scallions, Roasted Red Peppers and Eggplants.
I’ll just say one thing: CAULIFLOWER COUSCOUS! It was the texture of couscous and had that delicious raw cauliflower flavor. Bringing out the delicate flavor of couscous is difficult, especially when it’s on the same plate with pesto and roasted peppers, but it was all there and that plate was happy together.

Third Course: Beet Steaks, Fried Onion, Fried Egg, Spicy Feta, Yaprach (stuffed onion with scallion and celery)
Don’t tell me you can’t fill up on vegetables. The stuffed onion is a traditional Kurdish dish, Moti learned from his other grandmother. It was such a grandma food that makes you full and warm. I could have eaten ten. The beet steaks cooked enough to not be raw but still have a fresh crunch and they had a good sour bite to them.

Dessert: Pear Drunk with Red Wine and Pomegranate Sauce and Whipped Cream
There is nothing better than fruit for dessert with a generous amount of whipped cream. To me the fruit is an aside, in this case, a delicious warm, sweet and sour aside.

Moti you will be missed!